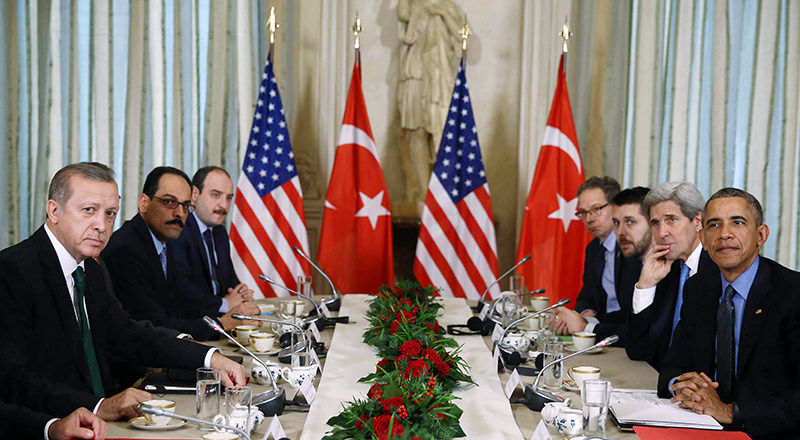 | IHA Photo
by Daily Sabah with Agencies Dec 01, 2015 12:00 am
President Recep Tayyip Erdoğan on Tuesday has underscored the importance of avoiding tensions between Russia and Turkey during his meeting with his American counterpart Barack Obama at the international climate talks in Paris.

President Erdoğan said that Turkey wants to avoid tensions with Russia, while Obama noted that the two leaders have discussed 'normalization' of relations between Turkey and Russia following the downing of a Russian warplane on November 24 over airspace violation.

"As the coalition forces, we are determined to keep up the fight against Daesh, and Daesh forces on the ground," Erdoğan said.

He repeated his denouncement of Russian airstrikes in Syria's Turkmen region. He said more than 500 civilians had been killed recently in an area where he said Daesh terrorists are not operating.

"They are Turkish descendants," Erdogan said. "That area is continuously bombed."

The U.S. President vouched for the NATO ally's right to self-defense, and he pledged a solid U.S. commitment "to Turkey's security and its sovereignty." He said the U.S. is very interested in accelerating its military relationship with Turkey.

Obama underscored that the Daesh terrorist group is the common enemy, while alluding to U.S. efforts to persuade Russia to focus its airstrikes in Syria against Daesh.

"We all have a common enemy. That is Daesh," Obama said and added: "I want to make sure that we focus on that threat."

The US president has also addressed the refugee crisis stemming from Syria's civil war. He praised Turkey for generously accepting Syrian refugees. He said border security has been strengthened and credited Turkey with increasing security along its border.