Turkey, Qatar agree to visa-free travel between the two countries 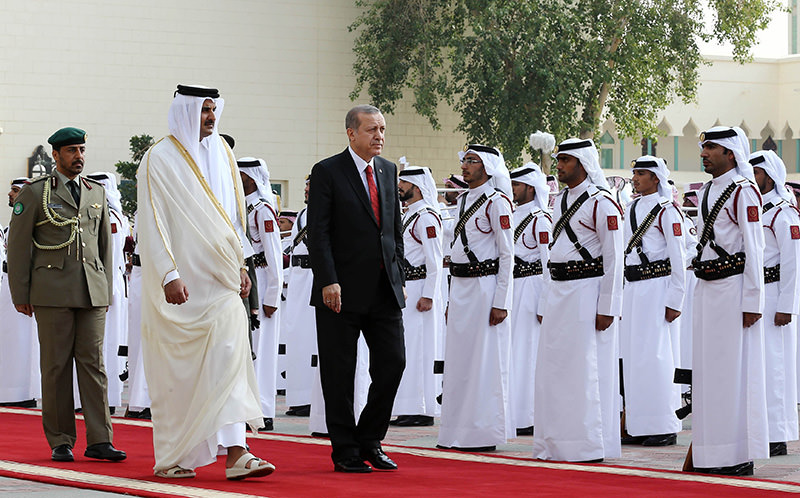 | IHA photo
by Daily Sabah with Agencies Dec 02, 2015 12:00 am
Turkey and Qatar have on Wednesday agreed to visa-free travel between the two countries, during President Recep Tayyip Erdoğan's visit to Qatar.

Erdoğan was welcomed to the country with an official ceremony by Sheikh Tamim bin Hamad bin Khalifa al-Thani, the eighth and current Emir of the state.

"From now on, visas have been lifted between Turkey and Qatar. The citizens of the two countries can now travel easily. This was a last minute step," President Erdoğan said during a brief talk to the press.

Erdoğan and al-Thani also chaired the Turkey-Qatar High Strategic Committee's first meeting in the Qatari capital of Doha during which 15 bilateral agreements were signed. Erdoğan said that the visa-free agreement was the 16th agreement between the two countries.

Turkey and Qatar agreed to cooperate in several sectors, including education, environment, science and technology, maritime and energy.
Before the committee meeting, Erdoğan noted that the Turkey-Qatar cultural year had been successfully carried out. "We will maintain good relations in the coming years," he said.

"Also, Turkish and Qatari armies conducted their first joint military drill. Some of our soldiers, who will be deployed at a military base to be established in Qatar, have started their duties," he added.

Before the implementation of lifting visas, Qatar required visas for Turkish citizens with a standard passport in order to enter the Gulf country. The visa was obtained at Doha International Airport for 14 days for tourist purposes.

However, to get the visa, the primary condition was that Turkish citizens had to have a credit card with a minimum limit of 100 Qatari Riyals ($27.50) or a corresponding amount in either dollars or euros. In addition, for the Turkish citizens holding other passport types – classified as green (private), gray (service) and black (diplomatic) – there were already no visa requirements.