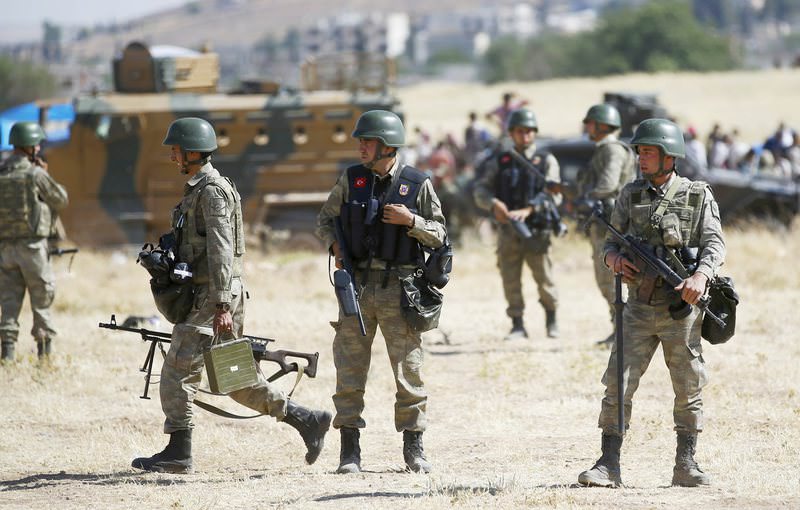 Turkey does not plan to deploy more troops to Mosul's Bashiqa region, saying the country is only working to train locals for the fight against DAESH, and assured that it respects Iraq's territorial integrity and sovereignty. Prime Minister Ahmet Davutoğlu sent a letter to his Iraqi counterpart Haider Al-Abadi late Sunday in which he emphasized Turkey's commitment to cooperation with Iraq, and said: "We will not deploy more troops to Bashiqa until your concerns about the matter are assuaged."

According to the statement released by the Prime Ministry, Davutoğlu informed his Iraqi counterpart about the military training program currently in progress in Bashiqa, duties and activities of Turkish soldiers and current developments about the matter. Saying that Turkey is committed to the integrity and sovereignty of Iraq, he stressed that "Turkey will not take a step against this principle." In the letter, Davutoğlu said Turkey will continue to support Iraq in fighting against DAESH. "We want to further and deepen our coordination with the Iraqi government in the fight against terror," Davutoğlu added in the letter.

Davutoğlu added in the letter. "We should not let those disturbed about our cooperation reach their targets," he concluded.

On Friday, 150 Turkish soldiers equipped with heavy weapons arrived on the outskirts of the DAESH-held Mosul province in Northern Iraq. Together with 1,200 soldiers, Turkey has currently 500 mechanized units in Bamarni, mostly tanks and infantry.

Another 400 commando troops are stationed at the border town of Kanimasi. Twenty to 25 tanks were also reportedly dispatched to the area.

Diplomatic sources said the stationing of troops is part of routine training exercises, and indicated that the decision to send in reinforcements was done with the Kurdistan Regional Government (KRG). Adding that soldiers were accompanied by armored vehicles and tanks for security reasons, sources indicated that the government in Baghdad has already known about the presence of Turkish troops in the region.

Foreign Minister Mevlüt Çavuşoğlu said it is Turkey's duty to provide security for their soldiers providing training in the region. "Everyone is present in Iraq … The goal of all of them is clear. Train-and-equip advisory support is being provided. Our presence there is not a secret," he said on a televised interview on Turkey's news channel Kanal 24. He also said troops were deployed in Iraq upon the invitation of the country's Defense Ministry.

Soldiers have been in the region to train Kurdish peshmerga forces and Arab troops for the past two-and-a-half years. Sources told Daily Sabah that Turkey has trained 2,500 troops from the peshmerga and 1,250 Arab troops, and the aim is to increase this number to 14,000 troops.

As Çavuşoğlu indicated that those will take place this week, Turkey's presence in the region is predictably to be on the agenda of meetings during the visits of KRG President Masoud Barzani and Iraq's defense minister, Khaled al-Obaidi.

Officials in the KRG have previously expressed their appreciation to Turkey. The KRG's deputy peshmerga minister, Maj. Gen. Karaman Kemal Omar, said Saturday that the training provided by Turkish soldiers had made "a huge contribution" to the operation by Iraqi Kurdish forces to retake Sinjar from DAESH on Nov. 12. Moreover, government spokesman Safin Dzayi said Saturday that the mobility witnessed in the region is actually in the context of Turkey's fight against DAESH as a part of the international coalition.

An official statement issued by the KRG said: "Within the framework of the international coalition against the Islamic State terrorist organization, ISIS [DAESH], Turkey opened two military training bases for peshmerga forces at the end of 2014 in the Soran and Qalacholan districts in the Kurdistan region."

Speaking to Daily Sabah, a senior government official stated that "the troops in Mosul have been deployed for training purposes and the tanks have been sent to protect the soldiers."

"We have been training Kurdish forces in Iraq for almost two years and we are there because we were invited. Our presence over there has been organized in coordination with the Iraqi Defense Ministry since the beginning." He added that the troop deployment to Mosul was done to relocate forces and due to security threats additional tanks were sent for protection. "The Iraqi government has been informed about this since the beginning. But, we understand their concern," he added.