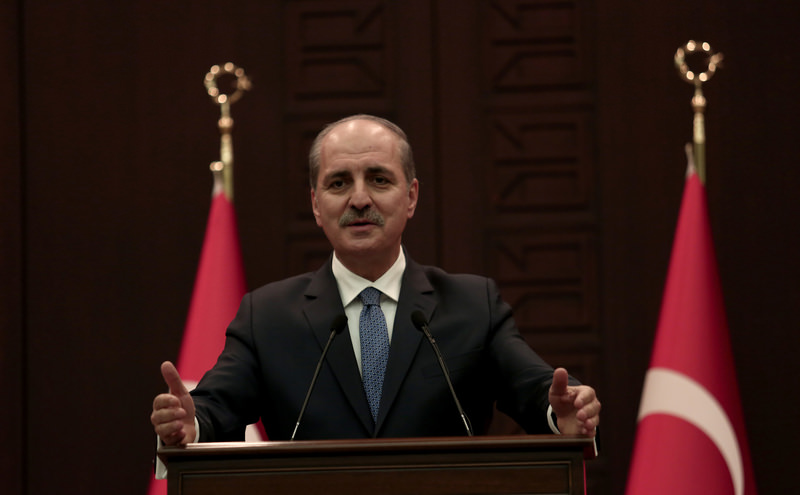 Deputy PM Kurtulmus speaking at a news conference in Ankara following a Cabinet meeting Dec 7, 2015. (AA Photo)
by Daily Sabah with AA Dec 07, 2015 12:00 am
Deputy Prime Minister Numan Kurtulmuş dismissed Monday the photograph of a Russian sailor appearing to aim a shoulder-held missile-launcher at Istanbul as a "childish show".

"Unfortunately, we interpreted that image as a show," Kurtulmus told a news conference in Ankara following a Cabinet meeting.

"There was no need for that. It is apparent from the photo that Turkey's security was being threatened. However, there was not the slightest threat against Russian ships passing through [the Bosphorus] in any way."

He added: "We wish there was no such incident. Let me reiterate that it was a childish show."

Earlier on Monday, Foreign Minister Mevlüt Çavuşoğlu urged Russia to step back from its "provocative" stance towards Turkey and Russian Ambassador Andrey Karlov was summoned to the Turkish Foreign Ministry for an hour-long meeting over the incident.

Under the 1936 Montreux Convention, Turkey controls the Bosphorus and the Dardanelles Straits and regulates the passage of warships between the Black and Mediterranean seas.

The incident took place as tensions between Turkey and Russia are at their highest since the end of the Cold War following the downing of a Russian warplane over southern Turkey, despite repeated warnings not to violate Turkish airspace.

Kurtulmuş also commented on a diplomatic row brewing in Iraq, where the government has called for the removal of Turkish troops.

"Turkey respects Iraq's territorial integrity," he told journalists. "Turkey's presence in northern Iraq is not against the central Iraqi government. Quite the contrary, the goal is to empower the central government in order to ensure an effective cooperation in the fight against Daesh."

Around 150 Turkish soldiers were deployed near Mosul on Friday to replace training forces already in the area. The deployment also saw 20 to 25 tanks dispatched to the area.

On Sunday, Turkish Prime Minister Ahmet Davutoğlu sent a letter to his Iraqi counterpart Haider al-Abadi to inform him of the activities of troops deployed to Mosul.