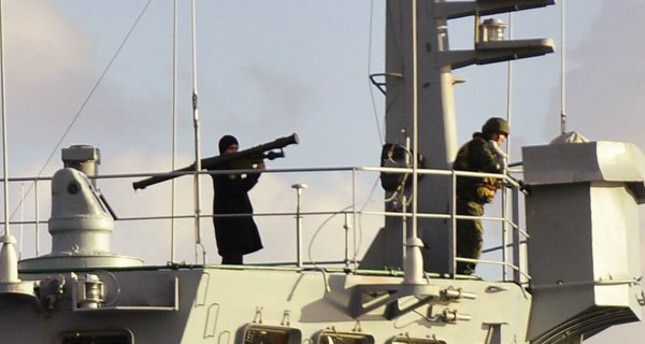 by Daily Sabah with Agencies Dec 07, 2015 12:00 am
Turkey's Foreign Ministry summoned the Russian ambassador on Monday after accusing Russia of a "provocation" after a serviceman on the deck of a Russian naval ship brandished a rocket launcher while the vessel passed through Istanbul on Friday.

The meeting with the Russian Ambassador Andrey Karlov reportedly lasted 45 minutes, during which Turkish officials told the ambassador of Turkey's "discomfort" regarding the Russian soldier's donning shoulder-fired surface-air-missiles on a warship during it transit through Istanbul.

The foreign ministry warned the Russian ambassador that there should be no repeat of a similar incident in the future, saying the Russian soldier's holding the missile in the firing position constituted as an act against the Montreux Convention on Turkish Straits.

Foreign Minister Çavuşoğlu Sunday defined the Russian soldier's action as "provocative" and "harassing." He told the reporters that there are certain rules of a ship's passing through Turkish straits and every ship -- whether it is of Russian or any other nationality -- had to abide by them.


"If Turkey perceived any ship's transit as a threat, it will give the necessary reaction. A Russian soldier's showing missile or such a munition system while passing [the Bosporus strait] on a Russian warship is a provocation," he said.

"We hope this incident is a one-time event, because it is not the right approach."

The Bosporus offers the only passage to the world's oceans for the Russian Black Sea fleet. A World War One-era treaty obliges Turkey to allow all ships to pass during peacetime.

The Turkish Air Force shot down the Russian aircraft that violated Turkish airspace on Nov. 24 after giving 10 warnings. The Turkish military later released a statement, saying that the nationality of the downed warplane was unknown during the warnings. But, since then ties between the two countries have been strained.