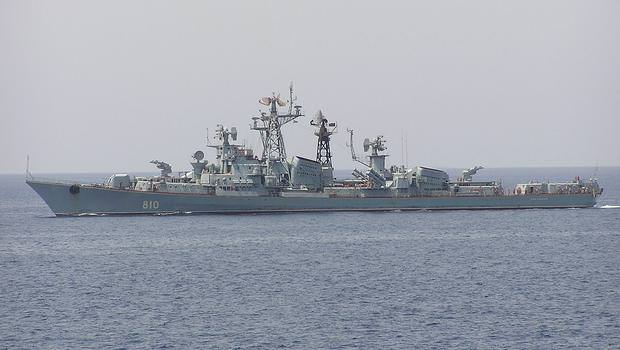 At a time of tensions fueled by the Kremlin over Turkey’s downing of a Russian fighter jet that violated its airspace, a Russian warship in the Aegean Sea fired warning shots for a Turkish vessel ‘to avoid collision,’ an incident that led to the summoning of the Turkish military attache in Moscow to the Russian Ministry of Defense on Sunday

Russia's Defense Ministry announced on Sunday that its navy destroyer Smetlivy "fired warning shots for a Turkish vessel in the Aegean Sea to avoid a collision," and Turkey's military attache in Moscow was summoned to the ministry over the incident.

Media outlets in Russia reported that the vessel, variably reported as a fishing boat and a large civilian ship, did not respond to calls to change course to avoid collision some 22 kilometers from the Greek Aegean island of Lemnos between Turkey and Greece. Upon failure to heed the warnings, the Russian crew fired small arms, and the vessel eventually changed course while only some 600 meters away from the destroyer.


The Turkish Foreign Minister Mevlüt Çavuşoğlu, regarding the incident, said that the ministry would release a statement after holding talks with the Turkish fishermen, according to various media reports. He said, "We do not favor tension, [this incident] needs to be overcome through dialogue."

"We have seen the Russian statement," Çavuşoğlu told reporters in Rome, where he had been following an international conference on Libya.

"But we are always saying: 'We are not in favor of tension'. We are in favor of overcoming tension through dialogue," he added, stating that Turkey's initiatives following "Nov. 24's sad event" -- the downing of a Russian warplane -- had always been in that direction.

Speaking to Doğan news agency the Turkish boat's captain denied that it had his boat been fired at, saying: "It's a lie. There is no such thing."

"We passed within a mile of a warship which was at anchor. We didn't even know that it was a Russian ship, we thought it was a NATO ship. We didn't realise we had been fired at," Muzaffer Geçici said.

The incident comes at a time of heightened tensions between Ankara and the Kremlin after Turkey downed a Russian Su-24 fighter jet on Nov. 24 near the Turkish-Syrian border after it violated Turkish airspace, according to Ankara, despite repeated warnings.

The Smetlivy, a part of Russia's Mediterranean fleet, is a guided missile destroyer and acts as a patrol ship near Syria whose regime is a close ally of Moscow. Lemnos is located only 14 nautical miles away from Gökçeada, a Turkish island in the northern Aegean Sea. Although the Russian warship's route is not known, it is assumed to be heading back to Russia through the Dardanelles, which lies further east from the site of the incident.

Turkey's Foreign Ministry summoned the Russian ambassador on Monday of last week after accusing Russia of provocation after a serviceman on the deck of a Russian naval ship brandished a rocket launcher while the vessel passed through Istanbul on the Bosporus on Friday.

The meeting with Russian Ambassador to Ankara Andrey Karlov reportedly lasted 45 minutes during which Turkish officials told him of Turkey's discomfort regarding the Russian sailor's holding a shoulder-fired surface-to-air missile on a warship during its transit through Istanbul.

The Foreign Ministry warned Karlov that there should be no repeat of a similar incident in the future, saying the Russian sailor's holding the rocket launcher in the firing position constituted an act against the Montreux Convention Regarding the Regime of the Straits, which regulates control of the Bosporus and Dardanelles in Turkey.

Foreign Minister Mevlüt Çavuşoğlu defined the Russian sailor's action as provocative and harassment. He told reporters that there are certain rules for a ship's passing through the Turkish straits, and every ship, whether Russian or any other nationality, had to abide by them.

"If Turkey perceives any ship's transit as a threat, it will give the necessary reaction. A Russian sailor showing a missile or such a munitions system while passing [through the Bosporus] on a Russian warship is a provocation," he said.
"We hope this incident is a one-time event because it is not the right approach."

The Bosporus is the only passage to the world's oceans for the Russian Black Sea fleet. The 1936 treaty obliges Turkey to allow all ships to pass during peace time.

The Turkish Air Force shot down a Russian aircraft that violated Turkish airspace on Nov. 24 after giving 10 warnings. The Turkish military later released a statement, saying that the nationality of the downed warplane was unknown during the warnings. Since then ties between the two countries have been strained.