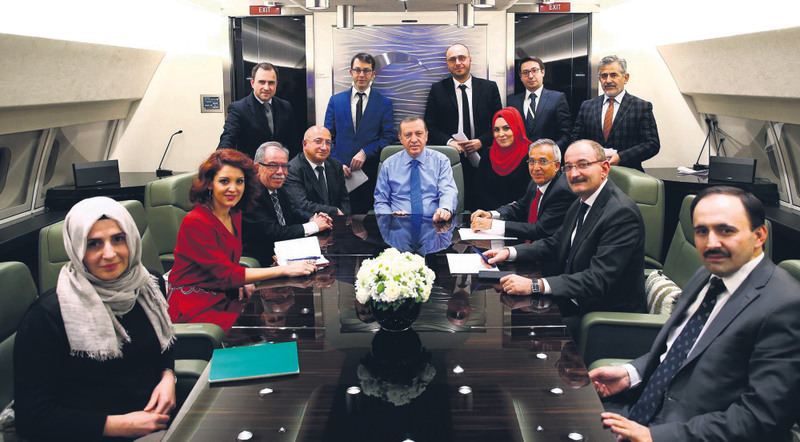 Speaking to journalists during his trip back from Turkmenistan President Erdoğan said normalization between Turkey and Israel was for the good of the entire region, repeating Turkey's three preconditions for any thaw. In the past week, certain signs from Israel sparked a new debate about the Israeli desire to mend relations with Turkey

President Recep Tayyip Erdoğan, speaking to journalists during his trip back from the Neutrality Conference in Turkmenistan over the weekend, said a diplomatic thaw between Turkey and Israel was for the good of the entire region, repeating Turkey's three preconditions for any thaw. In the past week, certain signs from Israel sparked a new debate about the Israeli desire to re-establish links with Turkey.

Israeli Energy Minister Yuval Steinitz voiced governmental discussions over possible natural gas exports to Turkey while the appointment of Yossi Cohen, a close ally of Israeli Prime Minister Benjamin Netanyahu and an expert on the region, as the new chief of Mossad was seen as a signal that the country wants to create an avenue to improve ties with regional countries, especially Turkey.

Erdoğan said that out of Turkey's three conditions, which are an apology for the 2010 Mavi Marmara massacre of Turkish activists by Israeli forces, compensation for the victims' families and an end to the blockade of the Gaza Strip, only the first one was fulfilled. Erdoğan, during the interview, touched on Iraq, which he criticized for filing a complaint against Turkey at the U.N., and also described Donald Trump as an unsuccessful politician for his Islamophobic remarks.

"I already said that once the compensation and the embargo problems were resolved, normalization process may start. This normalization process would be good for us, Israel, Palestine and the entire region. The region definitely needs this. I don't believe the Israeli public is pleased with the current state of relations. We need to consider the interests of the people of the region and introduce peace," he said.

On his meetings in Turkmenistan, Erdoğan said he had the opportunity to meet with Turkmen President Gurbanguly Berdymuhamedow along with Georgian President Giorgi Margvelashvili, Iranian First Deputy President İshak Cihangir and Pakistani Prime Minister Nawaz Sharif. There were also comprehensive meetings with Belarussian President Alexander Lukashenko, Kyrgyz President Almazbek Atambayev and Croatian President Kolinda Grabar-Kitarovic. He said the talks centered on developing trade ties and that most had proposed to mediate the differences between Turkey and Russia.

When asked whether natural gas trade came up during his discussions with the Turkmen president, Erdoğan said: "Turkmenistan's main problem concerning natural gas is Russia, which has decreased gas purchases from 40 billion cubic meters a year to 4 billion a year. They are now searching for alternative markets. China currently is the main buyer. They are now readying to build a gas pipeline that will reach India."

On the issue of Iraqi objections to the Turkish deployment of troops and military trainers in Bashiqa, Erdoğan said Iraqi Prime Minister Haider al-Abadi himself had asked for help in the training of Iraqi police and troops during his trip to Turkey late last year. He said the Turkish troops in Iraq not only trained Iraqi forces, but also the Kurdistan Regional Government (KRG) peshmerga forces to better fight DAESH. "With DAESH forces nearing the region, there arose the need to deploy a protection force. This is nothing like an occupation," he said, citing Turkey's previous stance against any occupation of the country.

Erdoğan also argued that during the recent visit by Foreign Ministry Undersecretary Feridun Sinirlioğlu and National Intelligence Organization (MİT) chief Hakan Fidan to Baghdad, they had received positive responses from the Iraqi officials they met. "However, immediately afterward, they filed a complaint at the United Nations Security Council [UNSC] against Turkey. We are currently in communication with the U.S. and U.K. I also talked to French President François Holland about the matter. I believe the UNSC will give the appropriate response to this negative attitude."Erdoğan said DAESH's presence in Iraq is a direct threat to Turkey's security and the Turkish deployment in Bashiqa, which is under Iraqi central government control, had to be preserved in order to continue the fight against all terrorist groups, including DAESH.Speaking about KRG President Masoud Barzani's visit to Ankara last week, Erdoğan said the threat the PKK terrorist organization poses to Turkey and the KRG was discussed.

TRUMP UNSUCCESSFUL AS A POLITICIAN

On the Islamophobic remarks made by U.S. Republican presidential candidate Donald Trump, he said Trump is a failure as a politician. "There are millions of Muslims in the U.S. That's the first mistake. I don't know if he'll win or not, but if he does, will he just ignore Muslim countries? A politician should not speak like that."

Erdoğan said he had focused on the fight against the Gülenist Terror Organization (FETÖ) while serving as prime minister and had continued to keep a tab on developments since being elected president. "In the latest operation in Ankara, 75 people were going to be detained; 55 had fled abroad. This alone shows that they, who include some of the most senior members of the group, are trying to flee justice.

He said he was not confident that all FETÖ operatives in the police were removed and so many fleeing showed the need for closer cooperation between the Interior and Justice ministries, the MİT and police. "Such efforts are not easy. They spent years to infiltrate state bodies. However, wherever they go, they will eventually pay for their crimes." He also said that judicial efforts against FETÖ in the U.S. were also proceeding encouragingly.

Erdoğan punctuated the need to change the current parliamentary system for a faster decision-making mechanism that would support economic growth. He said it was important to remove the perceived division in the state that was caused by the president and prime minister. He said: "Newspapers constantly claim there is some problem between myself and Prime Minister Ahmet Davutoğlu. He has been my advisor, foreign minister and prime minister. Why should we have any sort of problem? Any problem will harm my country, which is contrary to everything I stand for." He said it was imperative to replace the current Constitution, which is the product of the 1980 coup: "I believe if taken to a vote, the people will support such a change. This is not something personal. It is necessary for the country." He also said that he had asked some officials to start a public awareness campaign on presidential, semi-presidential systems.
RELATED TOPICS