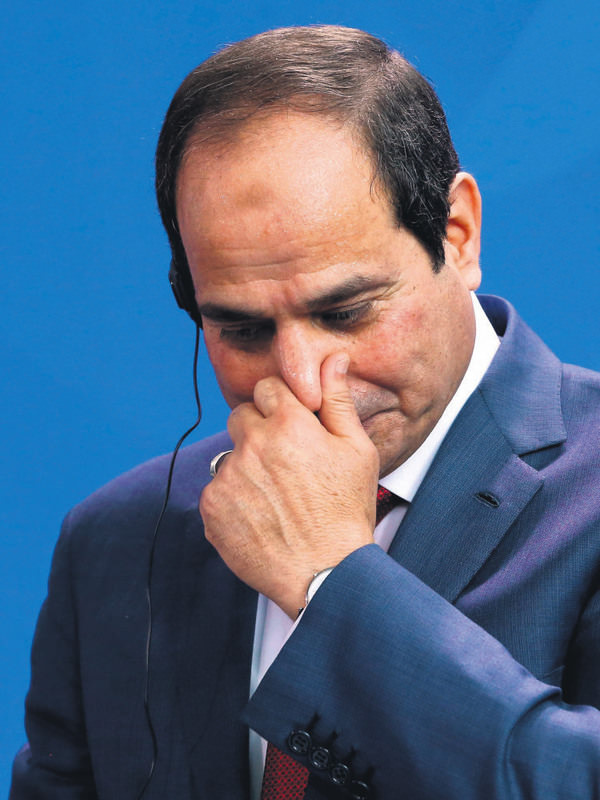 by Merve Aydoğan Dec 19, 2015 12:00 am
After Israeli and Turkish officials reached a preliminary agreement in efforts to normalize bilateral relations, Egyptian Foreign Minister Sameh Shoukry said during a televised interview late Wednesday that relations between Turkey and Egypt will be restored back to normal as well. "We [the Egyptian government] hope that with the return of Egyptian relations, Turkey will restore relations with Egypt – relations that were based on mutual respect and noninterference in internal affairs and sovereignty of the state," he said. Shoukry reiterated Egypt's respect for the Turkish people, adding that "we are always open to having positive relationships and building the interests of both peoples." Can Acun, a prominent expert on Middle Eastern politics from the Foundation for Political, Economic and Social Research (SETA), told Daily Sabah that while the normalization of relations depends on Egypt's fulfillment of the Turkish government's conditions, Egypt will take action in light of the pressure from Saudi Arabia.

Turkish-Egyptian relations deteriorated after Egypt's first democratically elected president, Mohammed Morsi, was ousted in July 2013 as well as the subsequent human rights violations that ensued. President Recep Tayyip Erdoğan expressed support for Morsi and the Muslim Brotherhood since they faced a brutal crackdown at the cost of souring relations with Egypt. The coup regime of President Abdel-Fattah el-Sissi has cracked down on journalists, academics and supporters of democracy who have been detained and held in military facilities, many of whom have died while in police custody as a result of mistreatment.

Erdoğan gave a statement to the media in April while returning from a visit to Tehran and listed four conditions that need to be met before Turkey would be willing to normalize ties with Egypt. The first is the immediate release of Morsi, followed by an annulment of all capital sentences given to supporters of the Muslim Brotherhood, which have been handed out to thousands of political opponents of the coup regime and now face execution in Egypt. Third, Erdoğan said Egypt needed to release all political prisoners, nearly 18,000 people. Lastly, all bans on political parties must be lifted so that a normal democratic process may flourish.

Prior to his visit to Iran, Erdoğan also met with Saudi King Salman where he stressed that it is impossible for Turkey to neglect Egypt. Erdoğan emphasized that Egypt, Turkey and Saudi Arabia are the most important countries in the region. Considering the recent developments in the region, notably the normalization of Turkish-Israeli relations, leads many to wonder if such normalization between Turkey and Egypt could possibly occur. Acun said the Middle East as a region is experiencing a historical turning point where country borders that were laid out in the Sykes-Picot Agreement have now become null and void. He also added that, in such conjuncture with countries like Turkey, Saudi Arabia and Egypt are bounded to act together with the new developments.

"Despite all the support it has received, the Egyptian government has become unsustainable and is facing a serious economic crisis with a congested political base. If the conditions are met, an agreement may be reached, and Turkey will encourage the normalization of relations with Egypt," Acun said. He also stressed that the Saudi side should also take action to encourage the normalization of relations.
RELATED TOPICS