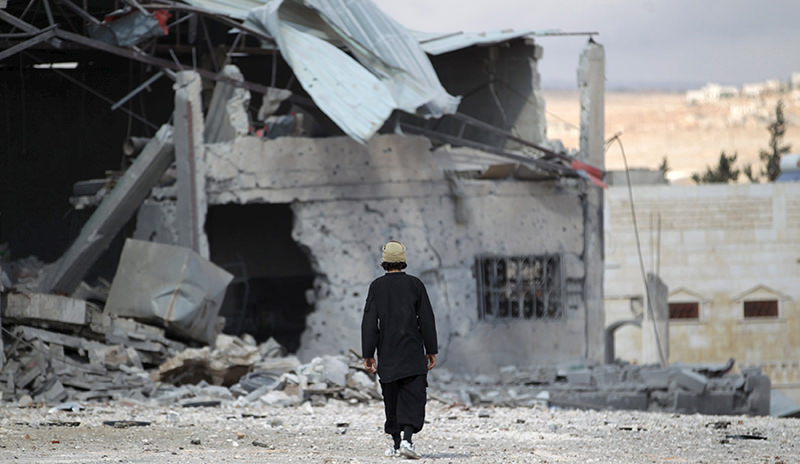 A man inspects a site hit by what activists said were airstrikes carried out by the Russian air force in the town of Babila, in the southern countryside of Idlib, Syria, October 7, 2015 (Reuters Photo)
by Daily Sabah with AA Dec 21, 2015 12:00 am
Foreign Minister Mevlüt Çavuşoğlu on Monday has condemned Russia for Sunday's airstrikes in Syria's northwestern Idlib province.

In a written statement, Turkey's top diplomat said that around 200 civilians had been killed and buildings damaged.

"Russia mainly targets the moderate opposition in Syria since it entered Syria on Sep. 30, 2015. Meanwhile, civilian residential areas have been increasingly targeted as well," the statement read.

Çavuşoğlu also said Russia has launched around 4,000 aerial attacks with over 90 per cent of those targeting moderate opponents of Bashar al-Assad.

He said those attacks had strengthened the hand of Daesh, adding that Russia was "dreaming" of handing the country over to the Assad regime again.

"The death toll of civilians due to Russian operations is over 600. Some organizations say this number is around 800. We want the world to know that more than 150 of this number are children," Çavuşoğlu said.

Çavuşoğlu said Russian operations which followed a UN endorsement of a Syria peace plan reached on Dec. 19 had happened before the "ink had dried" on the document.

Describing Russia's actions as "insincerity, to say the least," Turkey's foreign minister said such bombardments needed to stop targeting the moderate opposition and civilians, otherwise the conflict would continue for years.

Russia began air operations in Syria on Sept. 30 after receiving parliamentary approval. The Kremlin claimed the airstrikes, which followed a military buildup in Syria, aimed to support the forces of Syrian Bashar Assad, a long-standing Russian ally, against Daesh. However, Turkey and the West have accused Russia of targeting moderate fighters opposed to Assad, many of which are supported by Turkey and the U.S.

While Moscow has struck Daesh, especially after a Russian civilian airliner crashed in Egypt on Oct. 31, NATO has claimed Russia was targeting groups opposed to Assad, including some that enjoy U.S. and Turkish support.

At least 250,000 people have been killed since the Syria conflict began in 2011, according to UN figures.