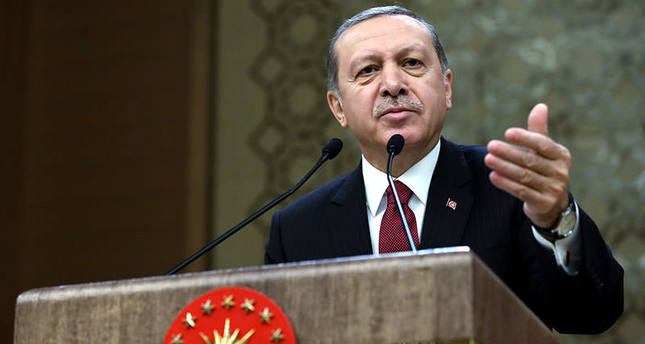 President Recep Tayyip Erdoğan, speaking Wednesday at a meeting with village headmen in the Presidential Palace in Ankara, said that concrete progress for a new constitution will be seen since parties in Parliament can no longer stand idly by anymore. "I am of the opinion that parties in Parliament cannot be unconcerned anymore. I believe that tangible progress will take place this term," he said.

Erdoğan's remarks came after opposition party leaders accepted an offer to meet with Prime Minister Ahmet Davutoğlu. Erdoğan also talked about a presidential system and said that people need to discuss the issue, saying: "If the most developed countries are ruled by presidential systems today. That's a common denominator. Therefore, why are we scared of it, abstain from it and try to escape it? The problem is different." He said: "The decision-makers on this issue are first the Parliament, then our nation. However I am of the opinion that our political parties in Parliament can no longer turn a deaf ear to this issue that has become a clear and strong demand of our people as well." He added, "To establish a system that better serves the nation, we are asking for a new constitution and a presidential system."

In a recent survey conducted by the Ankara-based Objective Research Center (ORC) on Monday, 63.5 percent of respondents indicated support for a presidential system, while 29.3 percent said it was not necessary to change from the country's current parliamentary system. The survey also found that 90 percent of participants support the formation of a new constitution. Turkey's current Constitution, which was accepted in 1982, despite several amendments in recent years, still carries traces of the Sept. 12, 1980 coup.

Davutoğlu said on Dec. 14 that Turkey could hold two separate referendums, one on constitutional reforms and one to change to an executive presidential system.

He said that the government would not impose anything on the people regarding a presidential system.

A constitutional amendment or a new charter is needed to set up a presidential system in Turkey. The country's current constitution was drafted two years after a military takeover in 1980 and numerous amendments have been made to it since then.

The entire world of Turkish politics has been caught up in the debate about whether the country needs a presidential system to replace the current parliamentary government, a move strongly backed by the AK Party government and Erdoğan. However, there has been strong opposition to the issue since Erdoğan brought it up. Erdoğan, in his speech at the panel, explained the basis of the reactions against the move: "Their opposition is not in principal, but personal." Erdoğan also argued against the idea that a possible presidential system in Turkey might turn the government into a dictatorship. He said: "A president who accounts to the nation can not turn out to be a dictator."

Regarding the recent Russian failure to decipher information on the black box from its jet that Turkey shot down, Erdoğan said that Russia's propaganda to vindicate itself is far from convincing: "Since the information that we have obtained is clear and proper, we did not have a single doubt over the issue. While Turkey's rightfulness has been accepted by the whole world, such far-fetched propaganda shows there is no sense but to embarrass those who have appealed to this."

He also said that although Russia could not decipher the data from the black box, the event helped detect those who side with Russia in Turkey. He said: "Once we thought that those who stood with the Soviet Union were behaving as such due to their ideological attitudes. We realized the truth when veteran socialists, a couple of liberals, neo-nationalists and even several nationalist figures sided with Russia today" and called them enemies of the nation using other titles as cover and a tool to endure the hostility.

Concerning Republican People's Party (CHP) Deputy Eren Erdem's statement that "Turkey provides sarin gas to DAESH," Erdoğan criticized CHP Chairman Kemal Kılıçdaroğlu's possessive statements about Erdem, saying: "His chairman also looks after the figure that stands with the country that is against Turkey. He says he will not let his deputy be victimized. Who is that deputy? He is a traitor saying that he will be on the side of Iran if the country confronts Turkey. For me, a chairman that shelters him is painted with the same
brush."
Last Update: Dec 24, 2015 11:16 am
RELATED TOPICS