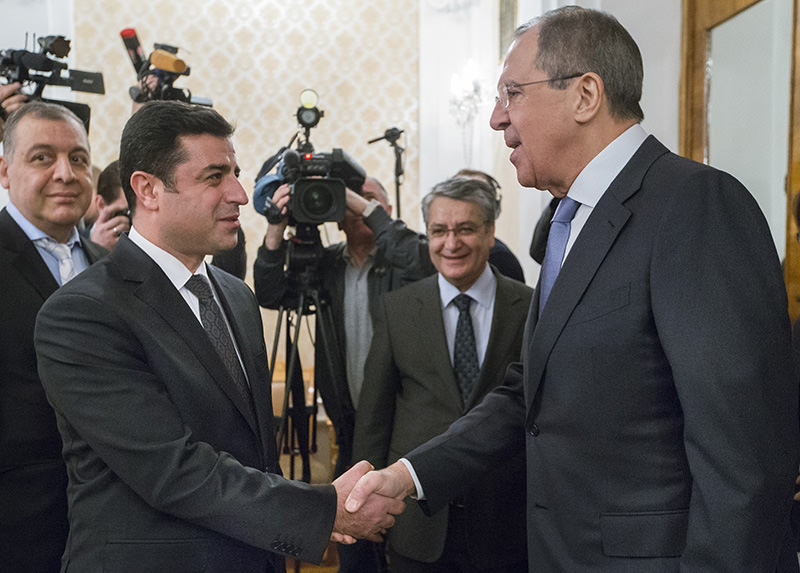 by Daily Sabah Dec 23, 2015 12:00 am
Selahattin Demirtaş, co-chairman of Turkey's pro-Kurdish Peoples' Democratic Party (HDP), met with Russian Foreign Minister Sergey Lavrov on Wednesday in a visit to Moscow, despite harsh criticism from all parties in the parliament. Representatives from Russia's Kurdish community were also present in the meeting.

According to the Russian Sputnik news service, in the part of the meeting that was open to the press, Demirtaş said they highly value relations with Russia in this tough period. Lavrov, for his part, said he also wanted to discuss the current situation in Syria with Demirtaş.

Lavrov also described Turkey shooting down the Russian jet as a "planned action" by the Turkish government, despite numerous statements from Turkish officials refuting this view. However, Lavrov claimed that the crisis does not affect Russia's relations with Turkish people.

In response, Demirtaş said that the downing of the Russian bomber jet was not the right decision, but now it is time to seek ways find a way out from the current tense situation.

Lavrov emphasized that Russia is ready to cooperate with forces fighting Deash on land, which include Kurdish forces.

Demirtaş's visit also includes opening up a representation office in Moscow. However, the timing of the visit and meeting with the Russian foreign minister was criticized as Russia keeps ignoring calls and actions from Turkey to ease the tension between the two countries.

Prime Minister Ahmet Davutoğlu criticized Demirtaş's visit during a Justice and Development Party's (AK Party) parliamentary group meeting on Tuesday and said that Russia is trying to redefine Syria through its interests.

Chairman of the Nationalist Movement Party (MHP), Devlet Bahçeli, was harsher in his statements criticizing Demirtaş.

"The HDP is working with Turkey's enemies and does not see a drawback to leaning its back on countries whose aims are clear, so as to garner their support for autonomy and Kurdistan," Bahçeli said.

Meanwhile, Demirtaş's visit was generally viewed positively in Russia as a means of keeping in touch with alternative political parties in Turkey amid the ongoing crisis. The HDP's political position is also important for Russian interest in Syria, Iraq and the Middle East in general.

The party represents the main pro-Kurdish political line in Turkey, and is believed to be the political representative of the PKK terror organization operating in Turkey. The Syrian Kurdish Democratic Union Party (PYD), which controls almost the entire north and northeast of Syria, is the PKK affiliate in that country. Other PKK-affiliated groups also have a presence in Northern Iraq and western Iran.

Russia has been vocally supportive of giving a more active role to the PYD in the fight against Daesh and in the future of Syria although Ankara has repeatedly asserted that the PYD is a terrorist organization. The government contends that the PYD's presence in northern Syria on the border with Turkey is a serious concern of national security while PKK terror in the country is ongoing. Ankara has also expressed concerns that the PYD modifying the demographic structure in areas where Kurds do not constitute a majority.

Lavrov's meeting with Demirtaş is expected to include a wider agenda than only bilateral relations.
Last Update: Dec 23, 2015 2:32 pm
RELATED TOPICS