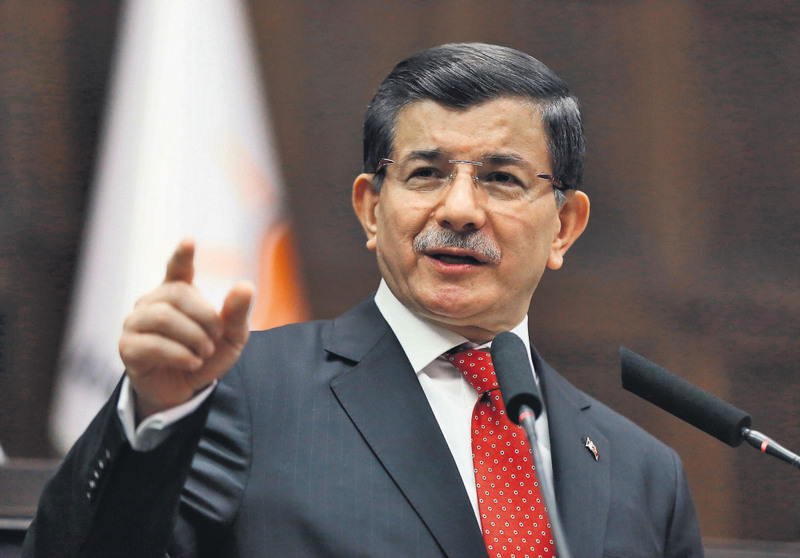 Although Turkey and Israel are in efforts to mend bilateral relations, PM Davutoğlu emphasized that Ankara will always seek the favor of the people in Gaza and stand for the liberation of Palestine

"Turkey will stand by Gaza until its children are liberated and will not abandon any oppressed people," Prime Minister Ahmet Davutoğlu said on Tuesday at a Justice and Development Party (AK Party) parliamentary group meeting.

Explaining that reconciliatory talks between Ankara and Tel Aviv continue, Davutoğlu said: "Nobody can question our sensitivity on the Palestine issue. Nobody shall test our sensitivity concerning Palestine. We will carry out all the talks in favor of Palestinians."

"Those claiming Turkey is forgetting the people of Gaza and is putting aside its support for Palestine to get closer to Israel, are carrying out a defamation campaign [against Turkey]," he said, and added: "Let alone forgetting about Gaza in negotiations, we do not even forget about it in our dreams at night. We will not forget Gaza, Palestine, Jerusalem."

On the other hand, Tel Aviv is maintaining its firm stance on not removing the eight-year blockade on Gaza.

Davutoğlu also said that Israel had apologized for the Mavi Marmara raid but there are still conditions that are yet to be met and that Ankara will share any positive development in the talks with the people.

Ankara has three conditions for restoring ties, an apology from Israel for the Mavi Marmara raid, compensation for the families of those killed in the raid and the lifting of Israel's eight-year blockade on Gaza.

Israeli Prime Minister Benjamin Netanyahu has already apologized for the raid and there have been reports that an agreement on conditions for compensation was sought between the two sides, the blockade of the Gaza Strip remains the most crucial part of Ankara's list of demands.

Speaking to journalists during his trip back from Turkmenistan, President Recep Tayyip Erdoğan said the normalization of ties between Turkey and Israel was for the good of the entire region, repeating Ankara's three preconditions for any thaw.

"I already said that once the compensation and the embargo problems were resolved, the normalization process can start. This normalization process would be good for us, Israel, Palestine and the entire region. The region definitely needs this. I don't believe the Israeli public is pleased with the current state of relations. We need to consider the interests of the people of the region and introduce peace," he said.

Turkish troops will stay until Mosul is purged of DAESH

Davutoğlu also indicated that Turkey's military training and equipment support for Iraq will continue until Mosul is liberated from DAESH terrorists. "Turkey shows sensitivity on the issue of protecting the territorial integrity of its neighboring countries. It is a matter that there will not be more redeployment of troops [to the camp]. Our armed forces are acting within the respect of territorial integrity," he said.

His remarks follow a statement by Defense Minister İsmet Yılmaz, who said earlier in the day that training personnel at the Bashiqa camp outside Mosul will remain and continue to train local forces in the fight against DAESH.

On Dec. 4, 150 Turkish soldiers equipped with heavy weapons arrived on the outskirts of DAESH-held Mosul in Northern Iraq to train forces. Baghdad demanded the withdrawal of soldiers. The Iraqi government on Dec. 6 gave Turkey a 48-hour ultimatum to withdraw its forces or face "all available options."

Ankara later withdrew some troops to another base inside Iraqi Kurdistan last week and said it would continue to pull out of Nineveh province where the camp is located. It did not say how many troops would be moved or to where.

We take care in separating terrorists from citizens

Davutoğlu said that those who support terror keep on lying and try to blur people's minds, saying: "Our people do not comply with the pressure of terrorism and do not make any concessions on its astute stance. None of our citizens fall into the PKK's trap. The terrorist organization and its supporters try to cover their desperation with lies."

"Protecting everybody's lives is the primary obligation of the state and our government. We pay attention to carefully separate the terrorists from the citizens."

He also pledged that a support package for artisans in southeastern provinces will be implemented to compensate for losses.

Syria will not be a tool for Russia's imperial goals

Davutoğlu said that Turkey will continue to stand up against all oppressive forces, including Russia, which bombs civilians instead of DAESH terrorists in Syria. He condemned the recent attack carried out by Russia in Syria's Idlib province, which killed civilians.

Tensions remain high between Turkey and Russia following Turkey's shooting down of a Russian military jet last month after it violated Turkey's airspace. After the incident, Russia imposed a range of unilateral sanctions on Turkey, including a ban on food imports.

Despite Turkey's efforts to mend relations with Israel, the latter is still obstinate regarding the conditions of Ankara's proposals to reset diplomatic relations and continues to refuse to remove the eight-year Gaza blockade. Speaking at a meeting of his Likud Knesset party on Monday, Israel's Prime Minister Benjamin Netanyahu said, "They [Turkey] argued against the blockade on Gaza and of course we don't intend to change our naval blockade policy. Even though Israel is the country that transfers the [goods for the] existence and rehabilitation of the Gaza Strip, we cannot give up on our security." He said: "There are ongoing talks with Turkey but we still have not reached an agreement and we aren't there for a simple reason: There are topics that interest us, such as Hamas's activity, but that's not enough for us; we want to ensure that there won't be any terrorist activities coming from Turkish territory."
RELATED TOPICS