Daesh attack on Bashiqa shows why Turkish troops are there, Erdoğan says 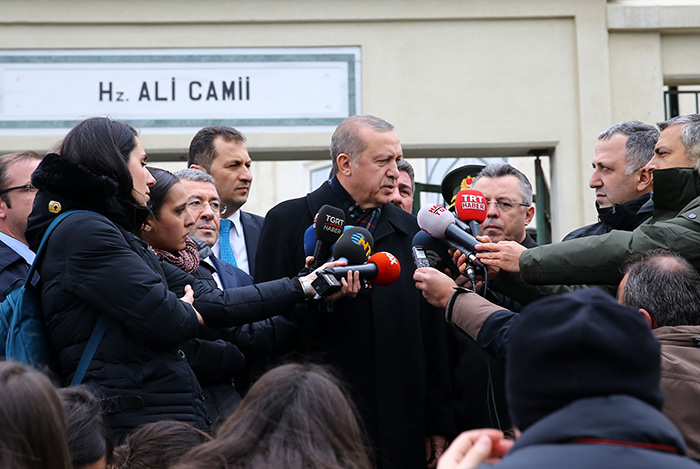 Turkish soldiers deployed in the Bashiqa camp, located in the Northern Iraqi town of Mosul, on Thursday night deterred a second attack in almost a month by the Daesh terrorist organization, killing 18 terrorists, military sources said.

Commenting on the issue, President Recep Tayyip Erdoğan said Friday that the attack is a justification for the long-debated deployment of Turkish troops.

Speaking to reporters after Friday prayer in Istanbul, Erdoğan said, "I have been told that some 18 Daesh terrorists who tried to sneak into the Bashiqa camp were killed," confirming that there were no casualties among the Turkish troops.

He said: "The attack shows how important the steps taken regarding the Bashiqa decision are. The troops there are ready for anything at any given time.

"Iraq asked Turkey to train its soldiers and they are the ones showing us the place for the base," the president said, adding that Iraq's attitude has changed since Russia and Iran's intervention in Syria, including the decision to open up an office in Baghdad by Russia, Iran, Syria and Iraq.

Regarding the attack, Turkish military sources reported no injuries or casualties among the Turkish soldiers.

The attack took place while debates concerning the presence of the Bashiqa camp in Northern Iraq are continuing, and in the aftermath of a visit to Ankara by U.S. Chairman of the Joint Chiefs of Staff Joseph Dunford.

Ankara has persistently emphasized its willingness to take part in the struggle against the DAESH terrorist organization.

Following the Dec. 15 attack, the Turkish military offered a written statement that Daesh attacked the camp with Katyusha rockets. Sources from the Turkish Ministry of Foreign Affairs said that Daesh targets in the area were destroyed by Turkish forces.

On Dec. 4, 150 Turkish soldiers equipped with heavy weapons arrived on the outskirts of the Daesh-held Mosul province in Northern Iraq to train local Iraqi forces, while Baghdad demanded the withdrawal of Turkish soldiers. On Sunday, Baghdad gave a 48-hour ultimatum to Turkey to either withdraw their forces, or face "all available options."

Turkish officials responded by saying that Iraq's reaction was bizarre, stating that Turkish troops were sent to Bashiqa in December 2014 at the request of Iraqi Prime Minister Haidar al-Abadi.

Erdoğan said Turkey had asked Iraq to allocate a suitable location for the deployment of Turkish soldiers to carry out the functions of training, and that Iraq has chosen the camp site in Bashiqa near Mosul. He also pointed out that Iraqi Defense Minister Khalid al-Obeidi had visited the camp.

Turkish Prime Minister Ahmet Davutoğlu sent a letter to Iraqi Prime Minister al-Abadi in December, in which he emphasized Turkey's commitment to cooperation with Iraq in the struggle against DAESH and said, "We will not deploy more troops to Bashiqa until your concerns about the matter are assuaged."

Turkey said the 150 soldiers and up to 25 tanks stationed at Bashiqa to serve to protect Turkish servicemen training Iraqi volunteers to fight Daesh terrorists. The training mission has been in operation since March and has not been assigned any combat duties.

He highlighted that the important point here is stopping coalition forces, notably the U.S., of unfair, oppression-based attacks by Russia and indicated that Turkey continues its efforts to prevent this in national and international meetings.

President Erdoğan also added that the steps taken by the government are in line with international law.