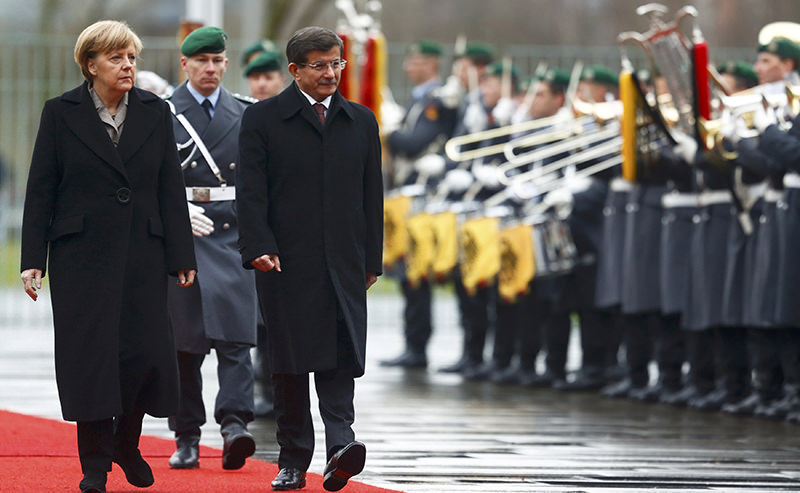 Davutoğlu has expressed his condolences to Merkel, as nine of the killed are German citizens, according to sources in the Prime Minister's office.

PM Davutoğlu reportedly informed the German chancellor of the incident and told her that Turkey will share details of the investigation regarding the blast with German officials.

He also noted that terrorists target all countries, and underscored that Turkey is determined to fight against them.

An explosion occurred in Istanbul's Sultanahmet Square early on Tuesday, killing 10 people and injuring 15. Deputy Prime Minister Numan Kurtulmuş said in a live TV press conference that the blast was carried out by a male Syrian suicide bomber born in 1988.

Later on in the day, Prime Minister Ahmet Davutoğlu held a live press conference, during which he said the assailant was a member of the Daesh terror organization.

Davutoğlu said, all killed in the blast were foreign nationals and Turkish citizens were among the wounded.

Media reports said the German tourists were from a company that was rewarding employees with an Istanbul trip.

The German Foreign Ministry issued a warning to German citizens in Turkey.

"Travelers in Istanbul are advised to temporarily avoid crowds even on public squares and outside tourist attractions," the warning on the ministry's website said.

Angela Merkel, who spoke to reporters about the attack at a press conference before the confirmation of German citizens among the casualties, said the attack would strengthen Germany's resolve to fight international terrorism.

"It hit Istanbul. It already hit Paris, Tunisia, Ankara. International terrorism showed its cruel and inhumane face again. We feel sorrow now but the attack again shows the need for decisive action against terrorism to overcome these atrocities," she said.