We will continue to stand shoulder to shoulder with Turkey against terrorism, says UK's Hammond 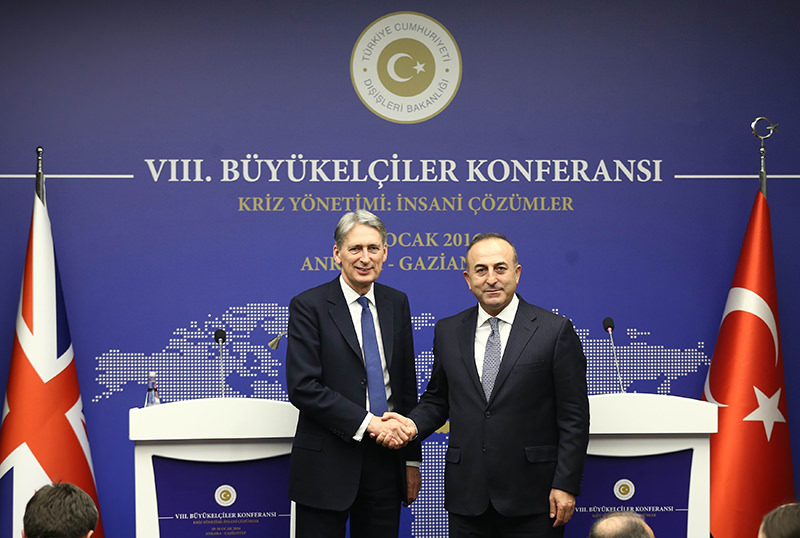 Britain's Foreign Secretary Philip Hammond (L) meets with Turkey's Foreign Minister Mevlu00fct u00c7avuu015fou011flu in Ankara, Turkey, January 14, 2016. (AFP Photo)
by Daily Sabah with AA Jan 14, 2016 12:00 am
Addressing a joint press conference with his Turkish counterpart Mevlüt Çavuşoğlu at the annual ambassadors' conference in capital Ankara on Thursday, British Foreign Secretary Philip Hammond described Turkey as a close and valued partner of the U.K while reiterating that the country will stand by Turkey in its fight against terrorism.

About the "shocking terrorist attack", Hammond said: "I reiterated to Foreign Minister Çavuşoğlu today the U.K. will continue to stand shoulder to shoulder with Turkey and other allies in the struggle against terrorism, wherever it comes from.

"I think Tuesday's attack has only reinforced the vital importance of us working together through this strong United Kingdom-Turkish relationship to combat terrorism and build a close partnership to counter Daesh activities."

The foreign secretary said Turkey and the U.K. had been working together to prevent foreign fighters from traveling to Syria , adding that both sides would continue their "excellent" cooperation between police and security forces.

About the future of Bashar al-Assad regime, Hammond said: "The U.K. has been very clear about its position that Assad has to go in order to allow a sustainable transition government to take office in Syria."

About the issue of hosting refugees, he said: "Literally nobody is doing more, other than Turkey to alleviate the humanitarian consequences of this civil war, and Turkey and Turkish people deserve credit for the generous way in which they extended a hand of friendship to those who are displaced."

Turkey has taken in around 2.5 million Syrian refugees since the civil war broke out across its southern border in 2011. The country has also taken in hundreds of thousands of refugees from countries such as Iraq, Iran and Afghanistan.

Hammond said that although the U.K. was not a part of EU's Schengen agreement, the bloc will contribute its full share of the ?3 billion package offered to Turkey to help refugees.

About Turkey's EU accession process, Hammond said: "The U.K. has always been the strongest supporter of Turkey's membership.

Turkey, which applied for membership in 1987, must comply with 35 policy areas, or "chapters", in order to join the EU. Recently, it was announced that the 15th such chapter will be opened for discussion soon.
Last Update: Jan 14, 2016 11:06 pm
RELATED TOPICS