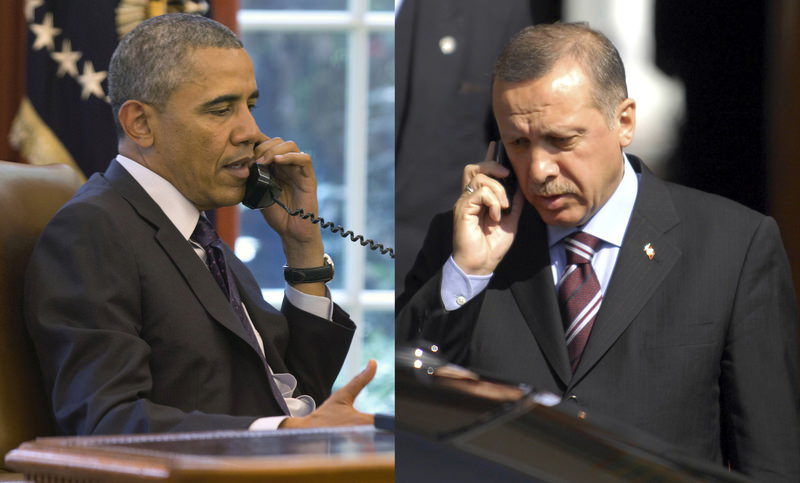 by daily sabah Jan 19, 2016 12:00 am
U.S. President Barack Obama called President Recep Tayyip Erdoğan on Tuesday and extended his condolences to his Turkish counterpart for the victims of the Istanbul and Diyarbakır terror attacks. In the call, Obama strongly condemned the attacks and reiterated his country's determination to stand shoulder to shoulder with Turkey in the fight against terrorism.

Condemning last week's suicide attack in Istanbul's historical Sultanahmet district perpetrated by a Daesh-linked bomber which claimed the lives of 10 and left 15 more wounded, he said "Istanbul is one of the most beautiful cities in the world. Any attack targeting Istanbul is also targeting all of us at the same time."

Obama also condemned last Thursday's terror attack in the district of Çınar in southeastern Diyarbakır province, which was carried out by the PKK terrorist organization and left six dead, including a baby, and 39 others injured. Obama further stated that the U.S. recognizes the PKK as a terrorist organization and the country stands with Turkey in its fight against the group.

According to information gathered from Presidential sources, the U.S. President conveyed his condolences to the whole Turkish nation. Sources added that Erdoğan thanked his American counterpart for his solidarity wishes and condolences.

Presidential sources further stated that both leaders reiterated their willingness to cooperate against every type of terror, notably Daesh and the PKK which both pose serious threats to peace in the region. During the call, both presidents noted that mutual cooperation against terror will be discussed further in U.S. Vice President Joe Biden's upcoming Turkey visit on Saturday.
Last Update: Jan 19, 2016 8:05 pm
RELATED TOPICS