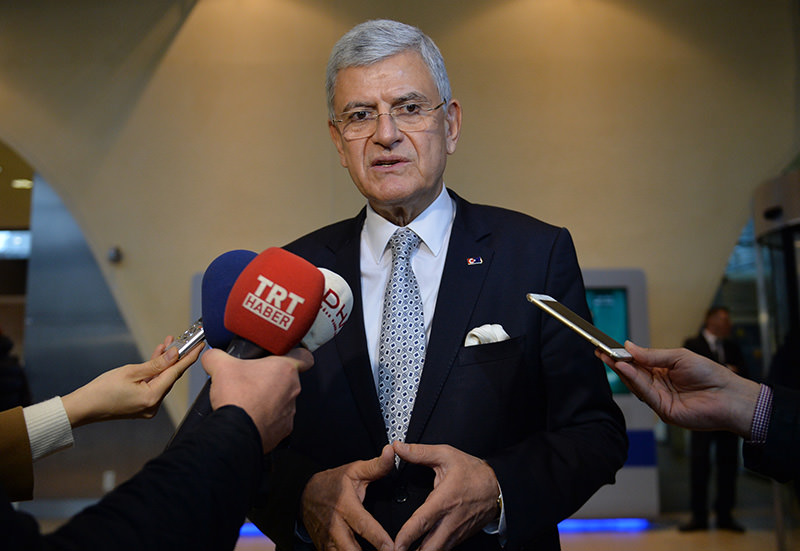 | AA photo
by Daily Sabah with Wires
Jan 20, 2016 12:00 am
The European Union must fulfil its promises as part of a 3 billion euro deal it struck with Turkey in return for stemming the flow of migrants into the bloc, Turkey's EU Minister Volkan Bozkır said on Wednesday.

Speaking on state-run TRTHaber, Volkan Bozkır said that Turkey had fulfilled its side of the bargain, but that the EU must resolve its internal differences, after European officials said last week that Italy was blocking plans to release the earmarked cash.

"The method (countries) will use regarding the deal is a matter of EU's internal affairs," Bozkır added.

Officials said Friday that Italy was blocking the deal since Italian Economy Minister Pier Carlo Padoan said although Rome supports Turkey's efforts to manage 2 million Syrian refugees on its soil, he insisted the money should come from the EU budget.

Dutch Finance Minister Jeroen Dijsselbloem said after talks in Brussels that Italy had not lifted objections to how the 3 billion-euro fund should be paid, "but we hope that that is possible very, very soon."

German Chancellor Angela Merkel acknowledged in November 2015 that the agreement, under which Europe will provide 3 billion euros and other inducements in return for Turkish help on stemming the flow of migrants, would not immediately halt the flow of asylum seekers from the Middle East and elsewhere.

But Merkel said it would help "keep people in the region" and out of Europe. The EU considers the necessity of the fund as part of a wider deal between the EU and Ankara that targets coping with the worst migration crisis in Europe since World War II.

Additionally, European Commission President Jean-Claude Juncker said on Friday that the EU's reputation is being damaged worldwide for the failure of member countries to manage the refugee crisis. On the same day, Swiss authorities rejected criticism over the practice of seizing cash from refugees, saying it is based on a decades-old law and only applies in a fraction of cases.
Last Update: Jan 20, 2016 11:34 pm