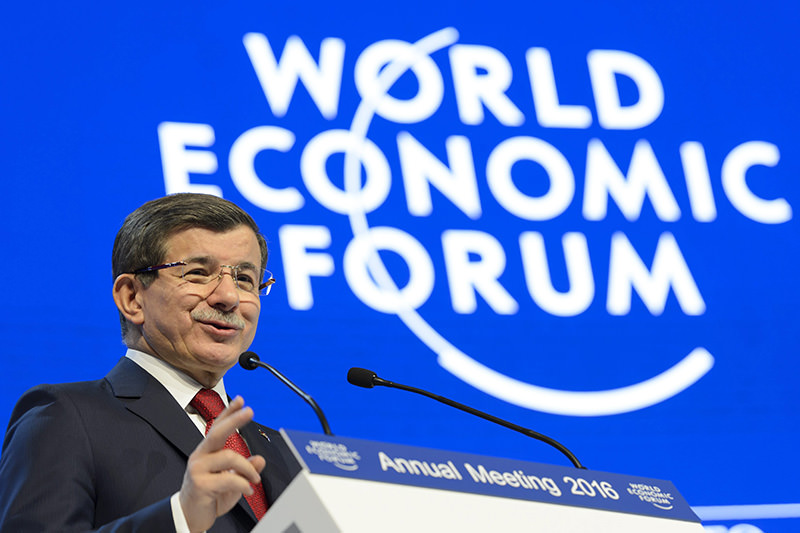 PM Davutoğlu has said Moscow is trying to subvert the talks to finding a solution to the Syrian war by including the PKK and its Syria-affiliate PYD, asserting that the Syrian National Coalition is the sole legitimate opposition group

Prime Minister Ahmet Davutoğlu said on Thursday that Ankara does not accept any opposition group to the negotiation table regarding Syria other than the Syrian National Coalition (SNC), noting that Russia and other countries are trying to undermine negotiation talks for a solution to the Syrian civil war by including groups such as the PKK and the Syria-affiliated Democratic Union Party (PYD).

In remarks made at the 46th Annual Meeting of the World Economic Forum (WEF) in Davos on Thursday, the prime minister said that Russia is complicating the fight against DAESH by bombing moderate Syrian opposition groups and that a coordinated international effort is needed to fight DAESH.

Davutoğlu said that terrorist groups must not be represented in talks centered on finding a solution to the conflict, reiterating that Ankara does not distinguish between DAESH and the PKK in its counterterrorism fight. "We have been helping the moderate opposition in the fight against DAESH while Russia and the Syrian regime target them at the same time," Davutoğlu said.

According to a report published earlier this week by the London-based Syrian Network for Human Rights (SNHR), the PYD has committed an atrocity of human rights violations in northern and northeastern Syria, including "ethnic cleansing massacres," since the withdrawal of government forces in 2012.

The report also states that the PYD and the Kurdish Self-Management (KSM) forces have committed major human rights violations since taking control of the remote regions of northern and northeastern Syria from DAESH. These violations include extrajudicial killings, forced displacement, arbitrary arrests and disappearances along with other violations against women, children and media personnel.

According to the report, the PYD has attempted to ethnically cleanse towns under its control that were predominantly inhabited by Arabs. Three massacres took place in four villages in al-Hasakah, resulting in the deaths of 91 civilians, including seven women and 17 children, the report says.

The SNHR said that KSM forces arbitrarily arrested no less than 1,651 people -- including 111 children -- since the beginning of the uprising in Syria in early 2011. Among them was Affan Jomaa al-Aboush, 16, whose body was found near a KSM military checkpoint on Dec. 17, 2014 and showed signs of being tortured, only five days after KSM forces had arrested him at his home. The report also cites 24 cases of the wrongful arrests and abductions of media activists, all of who were subsequently released.

Along with Arabs, ethnic groups like the Turkmens have also been targeted in al-Hasaka, according to the SNHR. In December, the head of the Syrian Turkmen Assembly, Abdurrahman Mustafa, said: "It has already been documented previously in international reports that the PYD has committed war crimes and violated human rights. They will do the same on the Azaz-Jarabulus line. We have to defend our lands at all costs," he said, adding that the PYD is planning to take the city of Manbij, ultimately threatening the lives of nearly 50,000 Turkmens who reside in the town.

Amnesty International released a report in October 2015 citing similar accusations aimed at the PYD's armed People Protection Units (YPG) regarding the non-Kurdish inhabitants in areas under PYD control in northern Syria. The report stated that some of the actions of the YPG amount to war crimes and that the non-Kurdish people who reside in the village -- mostly Turkmens and Arabs – were forced out of their homes by the de facto autonomous Kurdish administration.

The PYD has ratcheted up pressure on Assyrians and Yazidis in parts of Syria under its control while claiming to fight DAESH according to Afram Yakoub, the president of the Assyrian Federation of Sweden, who spoke to the Turkish state-run Anadolu Agency (AA) on Wednesday.

The PYD is the Syrian affiliate of the PKK, which is listed as a terrorist organization by the EU and the U.S.

Yakoub underlined a Jan. 12 attack by the YPG on Assyrians living in the al-Qamishli district of al-Hasakah province in which one person was killed and another injured.

"The PYD wants to stop the Assyrians from defending themselves by putting pressure on them," he said.

Citing a recent report by human rights watchdog, Amnesty International, Yakoub asserted that the PYD "has been committing war crimes in Syria."

He said that the PYD is attempting to portray itself as a democratic organization and a participant in the international fight against terrorism when their actions point to the contrary.

"The PYD is using DAESH as a pretext to alter the region's demography," he claimed.

'EU-Turkey refugee deal not matter of money, a humanitarian duty'

On Thursday, Davutoğlu also touched upon the migrant crisis during his speech, urging "concrete steps" from the European Union to help Turkey tackle the situation, a day before he holds critical talks with German Chancellor Angela Merkel.

The premier said he wouldn't even ask Merkel about the 3 billion euros in financial aid the EU promised last year to grant to Turkey in return for stemming the flow of migrants into the bloc.

"We are not asking (for) money, we are not negotiating (for) money... For us, it's a humanitarian duty, therefore the problem is not financial assistance," Davutoğlu said.

"We will be discussing these with my dear colleague Merkel and we hope the next steps will be concrete steps to address this issue," he added, speaking in English.

Under increased pressure to reduce the number of refugees arriving in Europe, Merkel will host PM Davutoğlu in Berlin for a joint meeting of key ministers from both governments.

Although EU officials have complained that Turkey was not doing enough to limit the numbers crossing the Aegean Sea, Davutoğlu suggested the country was doing more than its share, pointing to a government decision last week granting work permits to refugees, which was not part of the EU deal.

He also said that Turkey, which is home to more than two million Syrian refugees, has so far spent around 10 billion dollars helping them.
"We can spend some more for the poor orphans, victims of the Syrian tragedy," he said.

"But it's not only a German issue, it's not a Turkish issue, and now not even a Syrian issue. It's a global issue."