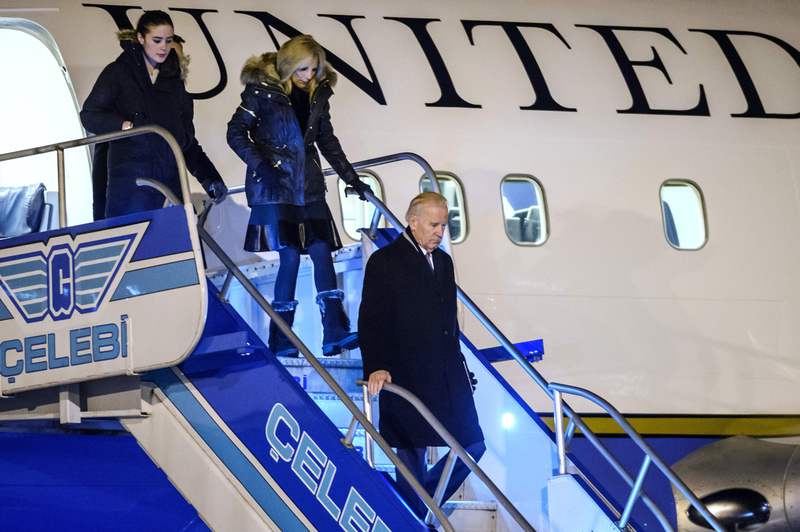 by daily sabah
Jan 21, 2016 12:00 am
U.S. Vice President Joe Biden arrived in Istanbul's Atatürk Airport late Thursday for a two-day official visit in which he will have talks on the growing terror problem in the region with President Recep Tayyip Erdoğan and Prime Minister Ahmet Davutoğlu.

Upon his arrival, extensive security measures have been taken. Jammer-equipped vehicles also escorted his convoy from the airport to the Conrad Hotel in Istanbul's central Beşiktaş district where the official will stay.

Counter-terrorism efforts against Daesh will be the key topic of discussion during his visit.

Regarding the Turkish military's presence at the Bashiqa camp in north of Mosul, Biden is expected to re-emphasize U.S. President Barack Obama's call for "the necessity to have respect for Iraq's sovereignty and the importance of full-withdrawal of Turkish troops."

Following Biden's arrival in Istanbul, the White House released a statement about a meeting between Biden and Iraqi PM Haider al-Abadi in Davos, Switzerland, "US Vice President Biden, in meetings with Iraq's Abadi, encouraged continued talks between Iraq and Turkey to resolve concerns about Turkish troops in northern Iraq," it said in the statement, further adding that the two officials also discussed counter-Daesh campaign and "urgency of stabilization efforts in Ramadi."

Turkish officials and Biden will share their opinions on ways to foster regional stability. They are also expected to discuss the Syrian-Arab groups that Ankara suggested the U.S. to train to repel Daesh terrorists from the Syrian-Turkish border.

Ankara will also reiterate its concerns over terrorist organization PKK's Syrian wing, the Democratic Union Party (PYD). While Washington understands Ankara's concerns regarding Turkey's national security and the Chairman of the U.S. Joint Chiefs of Staff Gen. Joseph Dunford gave several commitments to Ankara to prevent the PYD's armed People's Protection Units (YPG) from crossing the west of the Euphrates his on Jan.7, Washington also wants PYD's role to be taken into account in the fight against Daesh.

The recent developments in the Cyprus reunification talks, which Biden closely follows, will also be discussed in meetings with Erdoğan and Davutoğlu.

In addition to meetings with Davutoğlu and Erdoğan, Biden will also meet with civil society organizations and political party representatives on Friday.
Last Update: Jan 22, 2016 5:51 pm