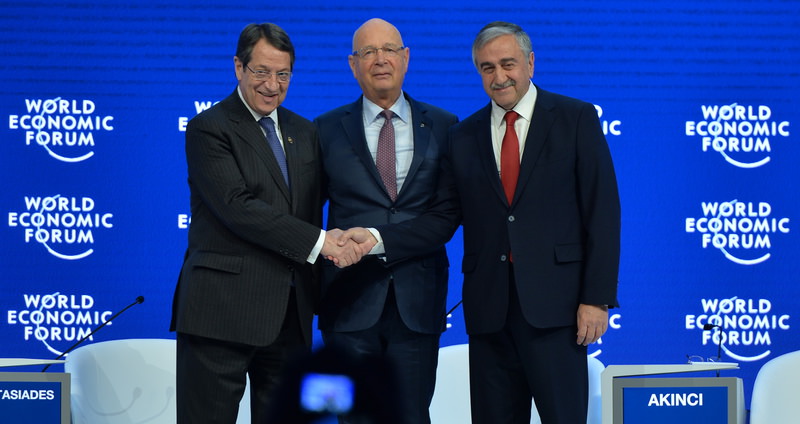 by daily sabah
Jan 22, 2016 12:00 am
After meeting Turkish Cypriot President Mustafa Akıncı in Davos on Thursday, Prime Minister Ahmet Davutoğlu said he is hopeful that the ongoing reunification talks on the divided island will now enter a phase where guarantor countries, Turkey and the U.K., join the talks.

Davutoğlu expressed his happiness with Akıncı arriving at a high-level diplomatic platform like Davos and said the two sides will "hopefully" achieve success at the talks in the upcoming months.

He also said that he had the opportunity to discuss the issue with British Prime Minister David Cameron during his visit to London earlier this week and that he also discussed the issue with U.N. Secretary-General Ban Ki-moon on Thursday.

The issue of property is the most complicated among the six main topics of negotiation. "The main focus now is to conclude the agreement with as little disruption as possible on property between Turkish Cypriots and Greek Cypriots who lost their homes before in 1974 and other times. We are seeking ways to identify exactly who will be entitled to reinstatement [of property] and who will be getting other types of compensation," U.N. special adviser for Cyprus, Espen Barth Eide, told Daily Sabah last month.

The Mediterranean island was divided in 1974 after Turkey as a guarantor state to the island staged a military operation after military leaders from Greece tried to take over through a coup following a decade of inter-communal violence and the isolation of Turks in several strongholds.

Greek Cyprus – the southern two-thirds of the island – claims sovereignty over the entire island as the Republic of Cyprus and enjoys international recognition, joining the European Union in 2004 despite assurances from the EU community that a permanent peace would first need to be established on the island beforehand. The northern third of the Island – Turkish Cyprus – is only recognized by Ankara and remains largely isolated.
Last Update: Jan 22, 2016 4:04 pm