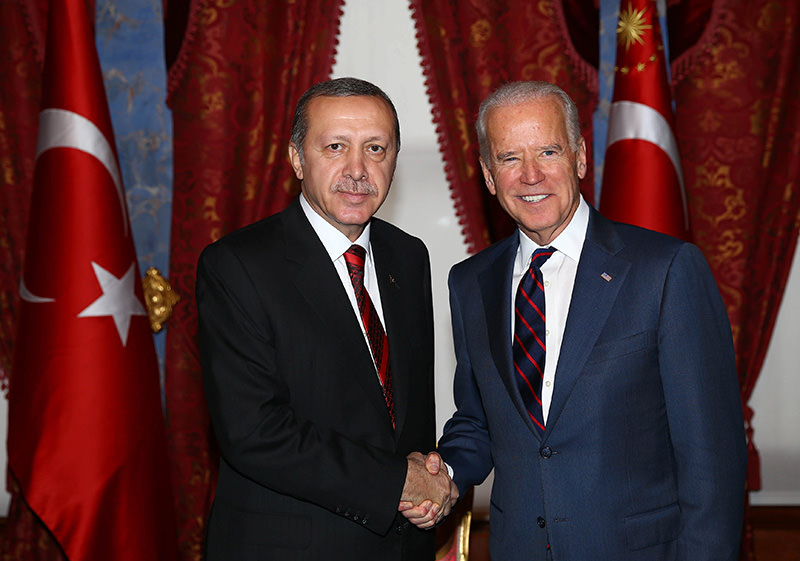 by daily sabah Jan 23, 2016 12:00 am
As debates over how countries such as Turkey, the U.S. and Russia will come to an agreement regarding the tense situation in northern Syria, President Recep Tayyip Erdoğan, who on Friday said Turkey saw no difference between terrorist groups, and U.S. Vice President Joe Biden will discuss claims that Russia is preparing to set up a base in Qamishli. Erdoğan will also convey Ankara's resolute stance on DAESH, the PKK and PKK-affiliated Democratic Union Party's (PYD) armed wing, the People's Protection Units (YPG). Speaking to journalists after Friday prayers, President Erdoğan stressed that he will discuss the red lines Ankara is drawing with Vice President Biden.

Calling claims that the PYD has crossed west of the Euphrates River as a "rumor," President Erdoğan said: "Especially in the region from the Iraqi border to the Mediterranean; namely, the northern corridor, we will not allow such restructuring." He added that Ankara has received intelligence about the Kremlin deploying 100 troops to the area.

"However, our sensitiveness in the region continues. We will discuss these issues tomorrow with Biden," he further said.

Underscoring that he previously touched upon the same issues briefly with U.S. President Barack Obama in a telephone conversation on Tuesday, Erdoğan affirmed that the issue will be on the agenda during Saturday's bilateral meeting as well.

"I hope that the mutual stance will be in favor of not leaving such wrongful structuring in northern Syria to chance," he added.

In a roundtable meeting about the Kurdish issue with Turkish politicians, U.S. Vice President Joe Biden said that the PKK is accepted as a terror organization by the world.

While talking about the Kurdish issue, Biden said "The PKK is internationally accepted as a terror organization and will remain to be so."

Meanwhile, the education minister Nabi Avcı confirmed claims that Russian troops are among the YPG ranks. "It is true that Russians are acting together in urban areas and regions that are under the control of forces loyal to the regime," he contended, adding that regime forces, Russian troops and the PYD act together in Qamishli. "I am making this statement as a care-taking minister," he further stated, adding that he aims to prevent discussions as to why he shared the information.

"The vice president encouraged ongoing dialogue between Iraq and Turkey to resolve concerns about Turkish troop deployments in northern Iraq and reiterated U.S. respect for Iraq's sovereignty and territorial integrity," the White House said in a statement about the meeting between the leaders in Davos, Switzerland.

Turkish soldiers deployed to the Bashiqa camp, located in the northern Iraqi town of Mosul, have recently deterred the second attack in almost a month by the DAESH terrorist organization.

Commenting on the issue, President Recep Tayyip Erdoğan said that the attack justifies the long-debated deployment of Turkish troops. "I have been told that some 18 DAESH terrorists who tried to sneak into the Bashiqa camp were killed," he said, confirming that there were no casualties among the Turkish troops.Erdoğan said, "The attack shows how important the steps taken regarding the Bashiqa decision are. The troops there are ready for anything at any given time. Iraq asked Turkey to train its soldiers and [Iraqi forces] are the ones showing us the location for the base," the president said, adding that Iraq's attitude has changed since Russia and Iran's intervention in Syria began, including the decision to open up an office in Baghdad which was made by Russia, Iran, Syria and Iraq.

On Dec. 4, 150 Turkish soldiers equipped with heavy weapons arrived on the outskirts of the Daesh-held Mosul province in Northern Iraq to train local Iraqi forces, while Baghdad demanded the withdrawal of Turkish soldiers.
RELATED TOPICS