Terror propaganda is not freedom of thought, Erdoğan tells Biden 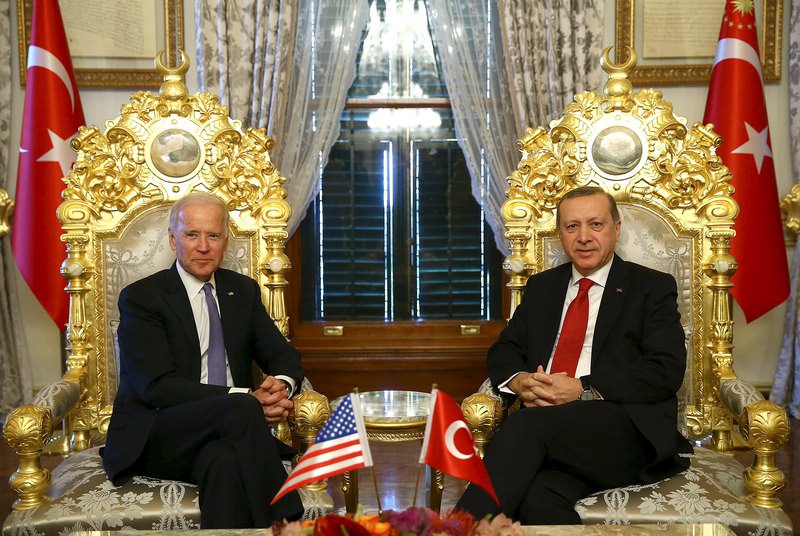 by Mehmet Çelik Jan 23, 2016 12:00 am
President Recep Tayyip Erdoğan and the United States Vice President Joe Biden held a meeting on Saturday in Istanbul where a series of terror related issues, as well as regional issues were discussed, including the PKK terror activities in Turkey and the recent events in Syria and Iraq.

The closed-door meeting was held at Mabeyn Palace in Istanbul and lasted 2 hours and 45 minutes.

A statement released by the Presidency after the meeting stated that President Erdoğan expressed his appreciation for the cooperation offered by the U.S. administration after the terror attacks in Istanbul and Diyarbakır provinces. The statement said that the president underlined the importance of correctly informing, as well as giving the right messages to the public when it comes to the anti-terror related issues.

During the meeting, Erdoğan warned against aiding those attempting to sabotage Turkey's determined stance against terrorism by giving the public wrong messages, the statement said.

Erdoğan highlighted that Turkey, like the U.S., is a state run by the rule of law, and any kind of terror propaganda or terror activities cannot be evaluated under the freedom of thought, the statement added.

An official from the U.S. administration had raised concern over the freedom of expression in Turkey due to the Turkish government's response to a recent declaration from academics that accuses the government of perpetrating a "deliberate massacre" of Kurds in Turkey.

"We do have concerns whenever any of our democratic partners which take actions which, you know, I think can be perceived as curtailing freedom of speech or activities by civil society groups," Reuters had reported, citing a senior U.S. official who spoke on condition of anonymity.

The statement also added that Biden reiterated that the U.S. stands by Turkey against terrorism and that they consider PKK as a terrorist organization.

In addition, issues related to anti-Daesh operations in Syria were discussed during the meeting.

Both leaders agreed on the importance and the need of a transitional government in Syria. Turkey participates in the U.S. led coalition forces in fight against Daesh in Syria.

President Erdoğan also touched upon the recent deployment of Turkish troops into northern Iraq and reiterated that Turkey's military presence in Iraq's Bashiqa is for training purposes only.

On Dec. 4, 150 Turkish soldiers equipped with heavy weapons arrived on the outskirts of the Daesh-held Mosul province in Northern Iraq to train local Iraqi forces, while Baghdad demanded the withdrawal of Turkish soldiers.