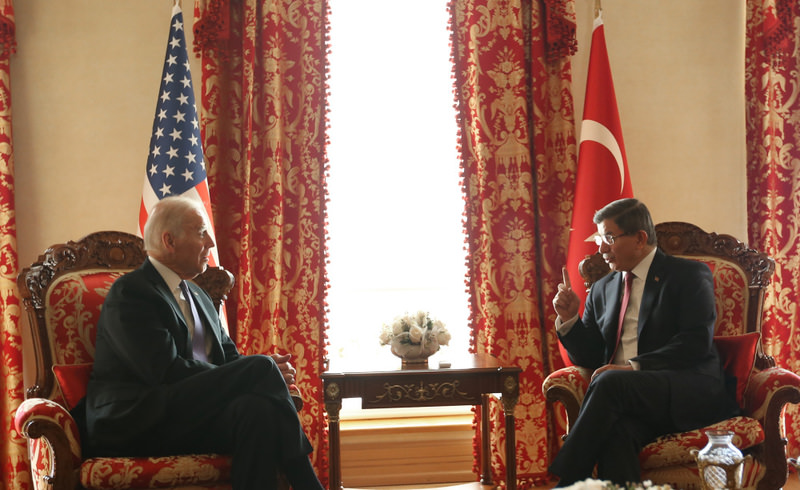 Ankara's stance on the YPG's affiliation with the PKK terrorist organization has been firm and will not change, President Erdoğan and Prime Minister Davutoğlu told U.S. Vice President Biden during his trip to Istanbul over the weekend

President Recep Tayyip Erdoğan and Prime Minister Ahmet Davutoğlu told U.S. Vice President Joe Biden during his visit to Istanbul over the weekend that the PKK's Syrian affiliate, the Democratic Union Party's (PYD) armed People Protection Units (YPG), is a threat to Turkey's national security as much as the Assad regime and DAESH. A written statement released by the Turkish presidency said Erdoğan reiterated Ankara's stance on the YPG, saying: "The PKK-affiliated PYD and its armed YPG are also considered terrorist groups by Turkey."

In addition to Erdoğan's message to Biden on the YPG, Davutoğlu made a statement following his meeting with Biden saying that Turkey identifies the PKK and DAESH terrorist organizations. Davutoğlu said: "Turkey sees the Syrian regime, DAESH and the YPG as threats. We shared with Mr. Biden our opinions with regard to the transition period in Syria."

Stressing that Ankara does not want to see any terrorist organization on its borders, Davutoğlu said: "We would not like to see DAESH or the PKK or regime forces on our border. The YPG is a wing of the PKK and it openly receives support from the PKK." Ankara has been concerned over differences of opinion with the U.S. on the YPG.

While Ankara asserts that the YPG is affiliated with the PKK, a designated terrorist organization by the U.S., EU and NATO, Washington does not share Ankara's concern.

The U.S. also provided arms to the YPG in October, which drew heavy criticism from Ankara. The U.S. air force dropped 50 tons of arms and ammunition to the YPG in the northern Syrian province of al-Hasakah. The 112 pallets reportedly contained ammunition for M-16s and AK-47s.

Defending the YPG because it fights DAESH on the ground in Syria, Washington continues to read from a different page to Ankara concerning the YPG. Even though the U.S. says the YPG is the only effective force fighting DAESH on the ground, Ankara reiterates that there cannot be any distinction of good or bad terrorist organizations.

'PKK IS A TERRORIST ORGANIZATION, NOT IN FAVOR OF PEACE'

The PKK and ongoing operations in the southeast against the organization were discussed during Biden's visit. Davutoğlu repeated that no armed force can exist within Turkish borders. Using an analogy to better convey to Biden the significance of the issue, he said "If al-Qaida dug ditches on U.S. borders, our stance would be the same."

Biden, defending Ankara's right to crack down on the terrorist organization, said "The PKK is also a threat to Turkey just like DAESH. The PKK is by no means in favor of peace. It is a terrorist organization. It conducts activities that cannot be accepted." He added that Ankara will "of course fight against terror" since peace talks failed and the PKK left no other choice.

'TERROR PROPAGANDA NOT FREEDOM OF THOUGHT'

Erdoğan and Biden also talked about the recent petition signed by some 1,128 academics that accuses the Turkish state of murdering children and civilians in the southeast, which was followed by the detention and discharge of some of the academics.

In response to Biden's statements a day before his meeting with Erdoğan in which he criticized Ankara for detaining and cracking down on the academics who signed the petition, Erdoğan said in the meeting: "Spreading terror propaganda and making statements that support terrorist activities cannot be considered freedom of thought.

Erdoğan also asserted that Turkey is a state of law, just like the U.S., adding that Ankara's allies should abstain from making statements or striking an attitude that could deal a blow to its resolute stance against terror.

Biden criticized the decision to label the academics traitors and said that such a position should not be taken in a democracy.

He also met with pro-opposition journalists, assumed to be opponents to Erdoğan, which drew mixed reactions, being interpreted as one-sided by some.

In mid-January 1,128 academics co-signed a petition accusing the Turkish state of massacring children and civilians in ongoing security operations in the country's southeastern provinces. The academics also called on the government to halt its operations at once and stop forcefully displacing Kurds in the region. The petition drew quick criticism from certain sectors of society, since it allegedly used the same phrasing as the PKK.

Because the petition failed to condemn or mention the violence caused by the PKK, it was interpreted as biased, and some academics who co-signed the declaration later withdrew their signatures and apologized to the public. Dozens of academics are currently under investigation and some have already been detained.