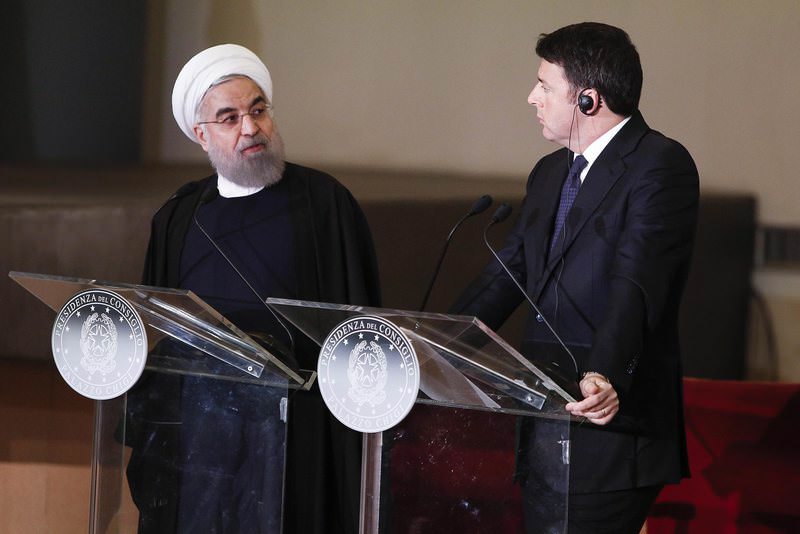 by Daily Sabah with AP
Jan 26, 2016 12:00 am
Italian Prime Minister Matteo Renzi said Monday that Iranian President Hassan Rouhani, kicking off the first state visit to Europe by an Iranian president in nearly two decades, "can play a fundamental role in the stability" of the Middle East.

Matteo Renzi told reporters after meeting privately with Rouhani that the landmark deal on curbing Iran's nuclear activities "is just a first step for a new season of peace and prosperity, not just in Iran, but in all the region."

Rouhani's four-day visit to Italy and France is part of efforts by Iran to reach out to its old partners following the implementation of the nuclear deal, and Rouhani is eager for foreign investments after the lifting of international sanctions. The trip was originally planned for November but postponed by the attacks in Paris.

After their meeting, Rouhani and Renzi looked on as government and business counterparts from the two countries signed a series of agreements for future cooperation, including one for high-speed trains, and two between Iranian gas companies and Saipem oil services.

Rouhani told reporters the political talks leading to the nuclear deal could provide the blueprint for pursuing peace in the Middle East.

Europe was Iran's largest trading partner before the sanctions, and a range of business and trade deals are on the table, including with Airbus for the purchase of new aircraft. The trip is also aimed at expanding tourism as Rouhani's administration is planning to diversify its revenue sources.

Rouhani met earlier with Italian President Sergio Matterella, and on Wednesday will meet Pope Francis at the Vatican. In France, he is to be welcomed by President François Hollande.

Italy was among Iran's top trading partners, with 7 billion euros ($7.6 billion) in trade dropping to 1.5 billion after the sanctions. Italian officials hope to rebuild that to 3 billion in exports alone through 2018.

The last trip to Italy by an Iranian leader was in 2008, when President Mahmoud Ahmadinejad attended an FAO summit in Rome without any official meeting with the host country's leaders.

In 1999, then-President Mohammad Khatami visited Italy. It was the first time since Iran's 1979 revolution that an Iranian leader had visited any Western country.