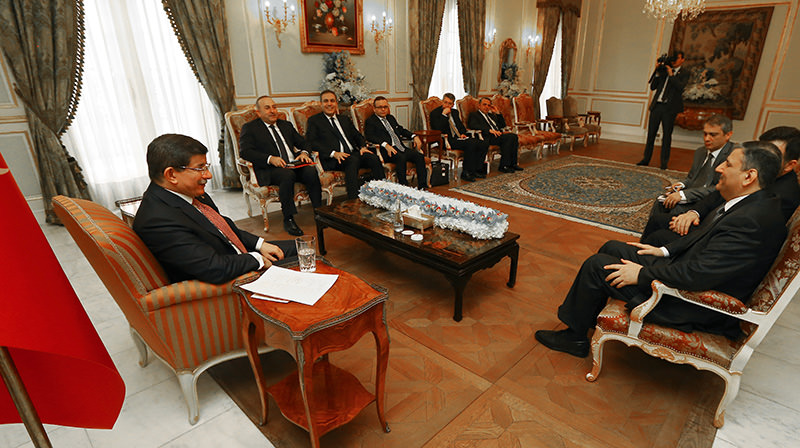 by daily sabah
Jan 31, 2016 12:00 am
Turkey's Prime Minister Ahmet Davutoğlu said on Sunday that Turkey will continue to side with Syrian people against regime, Daesh and foreign powers and state elements aiming occupation.

During a press conference held in the Saudi capital Riyadh, Davutoğlu said that Turkey and Saudi Arabia will continue to support moderate Syrian opposition, pointing out that the regime and Daesh terror organization, which are responsible for barbaric massacres, are equally guilty.

"We warn Russia once again that the harm done to opposition elements, moderate opposition and the hostile attitude towards Turkey's airspace are not for the benefit of Russia," Davutoğlu said, criticizing Russia's actions in Syria and its continuing violation of Turkey's airspace.

"When locations of ongoing Russian airstrikes are concerned, it's understood Russia doesn't have good intentions in Syria," he added, underlining the recent airstrikes are targeting Turkmen areas in the northwest Latakia province, along with moderate opposition fighting both the Syrian regime and Daesh in Aleppo and Idlib provinces.

Commenting over the recent Russian violation of Turkey's airspace, Davutoğlu said that it is not possible for Russia to either hide a violation or claim a non-existing violation. Stating that yesterday's violation lasted for a very short period and was detected by both Turkey and NATO radars, Davutoğlu said Turkey does not aim to escalate tensions with Russia, however it is determined to protect its airspace.

Davutoğlu continued meetings with Saudi officials on the last day of his visit, after performing "umrah" in Mecca and visiting the tomb of Prophet Muhammad in Medina on the first two days of his visit.

After coming together with Saudi King Salman at a luncheon given in his honor, Davutoğlu later met Defense Minister Muhammad bin Salman and Foreign Minister Adel al-Jubeir to discuss bilateral relations, regional developments such as the Syrian peace talks in Geneva, Iraq, Yemen and the fight against terror.

Davutoğlu also held a meeting with the owners of Saudi Arabia's top 20 companies under the Prime Ministry Investment Support and Promotion Agency (ISPAT) and met with representatives from the Saudi press toward the end of his three-day visit.

Davutoğlu is in Saudi Arabia at a time when tensions between Riyadh and Tehran are at a rare high after Saudi Arabia's execution of prominent Shiite cleric Nimr al-Nimr on Jan. 2.