You can’t say the PKK are terrorists and the PYD are not: President Erdoğan 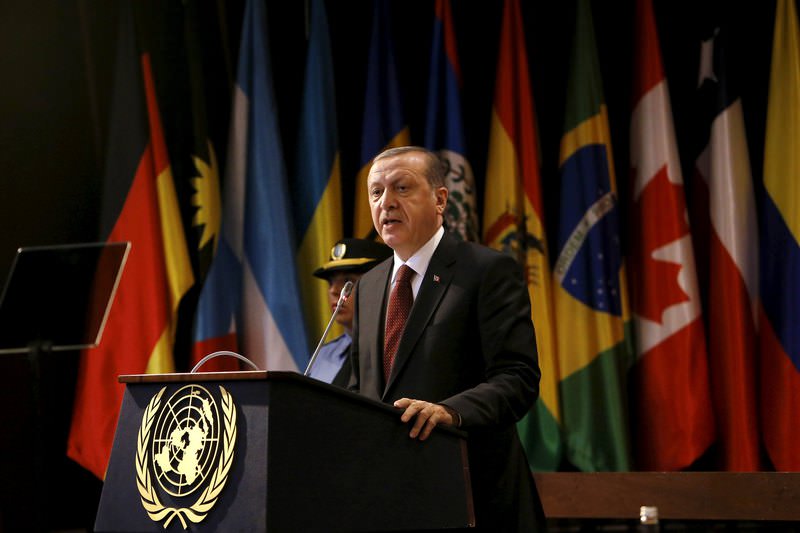 by Daily Sabah with AFP Feb 02, 2016 12:00 am
Speaking at the Economic Commission for Latin America and the Caribbean on Monday, President Recep Tayyip Erdoğan criticized the U.S. for discriminating between terrorist organizations while reiterating Turkey's clear-cut stance in the fight against all kinds of terrorism.

"You can't say that the PKK is a terrorist organization and the PYD is not', said Erdoğan, heavily criticizing Washington's "insincere" stance on the PKK's Syrian affiliate.

While Ankara asserts the fact that the PYD is affiliated with the PKK, a designated terrorist organization by the U.S., EU and NATO, Washington does not share Ankara's concern.

The U.S. also provided arms to the PYD and its armed wing People's Protection Units (YPG) in October, which drew heavy criticism from Ankara.

The U.S. air force dropped 50 tons of arms and ammunition to the PYD in the northern Syrian province of al-Hasakah. The 112 pallets reportedly contained ammunition for M-16s and AK-47s.

"Whether the PYD, PKK, DAESH or DHKP-C, our stance is the same against all terrorist organizations", the president said.

Underlining that as Turkey he expects all countries to fight equally against all terrorist organizations, Erdoğan once again stated that "terrorism has no race or religion".

"Those associating Islam with terrorism have to know that they are the biggest supporters of those terrorist organizations who owe their strength to the exploitation of the religion. I am putting this straight: the word 'Islam' originates from the word 'peace'," Erdoğan said.

"Furthermore, Daesh is a terrorist organization and the biggest enemy of Islam. I have spoken out this truth many times before. The attitude to associate terror with an ethnicity or religion helps strengthen these movements that are a disgrace to humanity," he added.

Also on Monday, speaking at a press conference after meeting Chilean President Michelle Bachelet, Erdoğan said that Turkey had spent more than $9 billion on services for 2.5 million refugees from conflict-torn Syria and Iraq.

"Turkey has opened its doors without distinction to more than 2.5 million Syrian and Iraqi refugees. So far, the amount we have spent surpasses $9 billion," Erdoğan said.

"All these refugee dramas we see on television, these dead people's bodies, are the symbols of this conflict," he added.
President Michelle Bachelet openly praised Turkey's role in dealing with the humanitarian crisis and agreed that the international community had yet to fulfill its responsibilities on the matter.

Erdoğan, who arrived in Santiago Sunday, is on a three-country South American tour focused on expanding Turkey's ties outside its traditional sphere of influence.

Erdoğan's three-nation Latin American tour started on Sunday with Chile, where he is scheduled to stay until Feb. 2. The President's trip to Chile will be the second Turkish visit to the country at the presidential level. The last such visit was by Süleyman Demirel 21 years earlier, when he served as the ninth president of Turkey.

Chile's former President Sebastian Pinera visited Turkey in 2012, when he signed a number of agreements as part of a strategic partnership framework. Chile was the first Latin American country with which Turkey signed a free trade agreement.

Ninety years have passed since bilateral relations started between the two countries, with Chile's recognition of the young Republic of Turkey. The trade volume between Turkey and Chile amounted to $417 million in the first 11 months of last year, a decrease from $921 million in the same period of 2014. Erdoğan will head to Peru on Feb. 2, as the first Turkish president to visit, and Ecuador will follow on Feb. 3.

While the tour is seen as critical for the development of bilateral relations between these countries and Turkey, the president will also preside over the signing of a series of important agreements expected to cover areas such as economic and technical assistance, industrial investment, infrastructure development and technical and scientific exchange. The total amount of foreign trade volume between the three countries and Turkey is $849 million, while their total value imports is $140 billion.