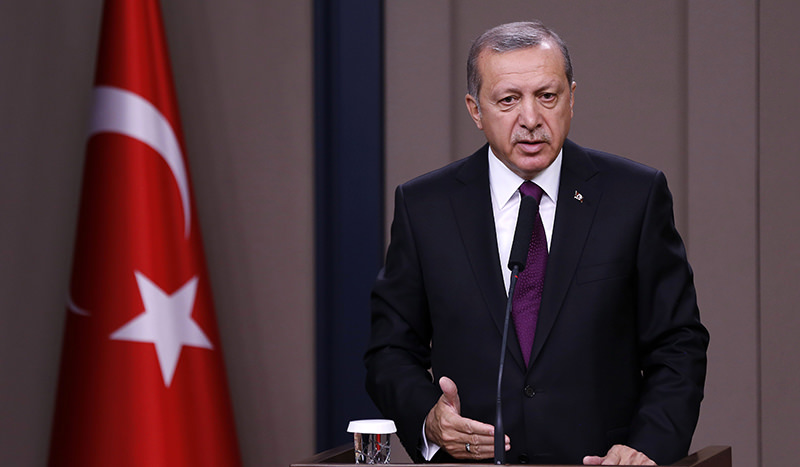 President Erdoğan, speaking during his Latin America tour, said the postponed Geneva talks on Syria were pointless as long as the Assad regime and Russia continued to bomb and kill children

President Recep Tayyip Erdoğan Thursday criticized the peace talks being held in Geneva and said that they are "pointless" as long as the Bashar Assad regime and Russia continue to kill children in Syria. Speaking at San Ignacio De Loyola University in the Peruvian capital after receiving an honorary Ph.D. degree, Erdoğan touched upon the "temporary pause" imposed on the peace talks and said the world is awaiting a resolution. "Why did you [Russia and the Syria regime] come together in Geneva?" the president asked, adding that the Syrian Crisis has created the biggest humanitarian tragedy since the end of World War II.

He underscored that it was crucial to put an end to the oppressive Assad regime, and enter a political transition process where the legitimate demands of the Syrians can be met. Syria's main opposition group will not return to peace talks until their humanitarian demands are met, chief coordinator Riad Hijab said Wednesday, after the U.N. suspended negotiations in Switzerland until Feb. 25. The group "will leave Geneva tomorrow (Thursday) and will not return until humanitarian demands are met or (we) see something on the ground," Hijab told reporters. The High Negotiations Committee "came [to Geneva] because of these assurances, but the opposite happened," he said. "Nothing transpired on the humanitarian front, and the regime caused the political process to fail."

"Unfortunately whenever there begins a political process, the regime feels threatened and uses these kinds of tactics," Hijab said. "The whole world sees who is making the negotiations fail. Who is bombing civilians and starving people to death."

In a separate news conference, chief Syrian regime negotiator Bashar al-Jaafari blamed the failure on opposition "preconditions". "Since its arrival... [the HNC] refused to take part in any serious talks with the [U.N.] special envoy," state news agency SANA quoted Jaafari as saying.

UN special envoy Staffan de Mistura said earlier on Saturday that the "temporary pause" was needed because there is "more work to be done, not only by us but the stakeholders," referring to outside powers embroiled in the conflict. "It is not the end or the failure of the talks," he said.

The comments came after several days of fruitless talks, during which de Mistura tried to coax the Syrian regime and opposition into beginning six months of indirect talks.

The U.S. and France have accused President Bashar Assad's regime of undermining the talks to end Syria's civil war, which were suspended hours before donors were due to meet Thursday to raise aid for the conflict-torn country.

French Foreign Minister Laurent Fabius accused Damascus and Russia of "torpedoing the peace efforts" by launching an offensive near Aleppo, and said world powers would hold "in-depth consultations" regarding their actions at the conference.

The UN paused fruitless peace negotiations on Wednesday, as the Syrian government said it had cut a key supply route to Syria's second city from the Turkish border with the help of Russian air strikes.

US Secretary of State John Kerry said the Syrian government's push to grab territory while negotiations were meant to be getting underway proved the regime was not serious about the talks.

"The continued assault by Syrian regime forces – enabled by Russian air strikes – against opposition-held areas... have clearly signaled the intention to seek a military solution, rather than enable a political one," he said.
Last Update: Feb 04, 2016 9:43 pm
RELATED TOPICS