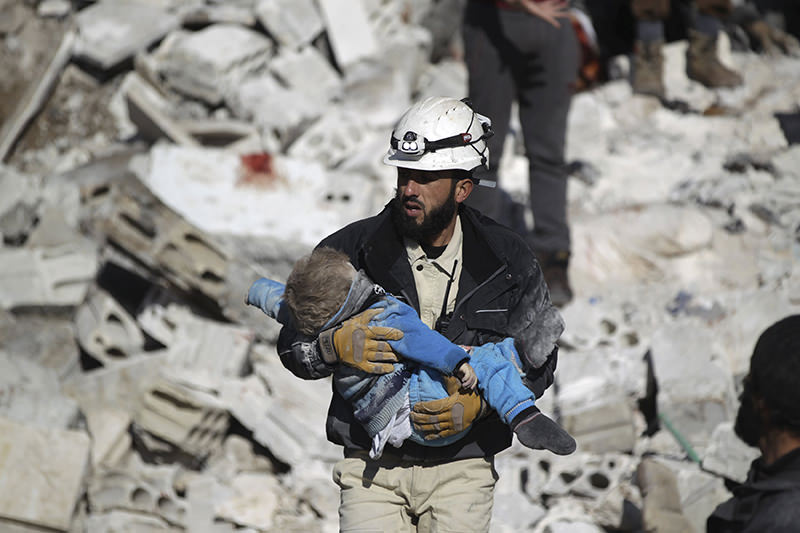 At least 70 people died in what activists said where four vacuum bombs dropped by the Russian air force. (REUTERS Photo)
by Daily Sabah with Reuters Feb 04, 2016 12:00 am
Russia is trying to divert attention away from its own war crimes in Syria by suggesting that Turkey is preparing a military incursion in the country, a senior official in Turkish Prime Minister Ahmet Davutoğlu's office said on Thursday.

"The Russians are trying to hide their crimes in Syria. They are simply diverting attention from their attacks on civilians as a country already invading Syria. Turkey has all the rights to take any measures to protect its own security," the official told Reuters.

A Russian defence ministry spokesman said earlier on Thursday that Moscow had serious grounds to suspect Turkey is preparing a military incursion in Syria.

Since the conflict began in March 2011, more than 260,000 people have died and more than half of Syria's population have fled their homes.

The conflict has dragged in a range of international players, from Iran, Turkey and the Gulf states -- the latter two on the opposition side -- to Western nations and, since late September, Russia.

The chaos has also fuelled Daesh group which has overrun swathes of Syria and Iraq and staged a series of deadly attacks across the globe, including in Paris in November.