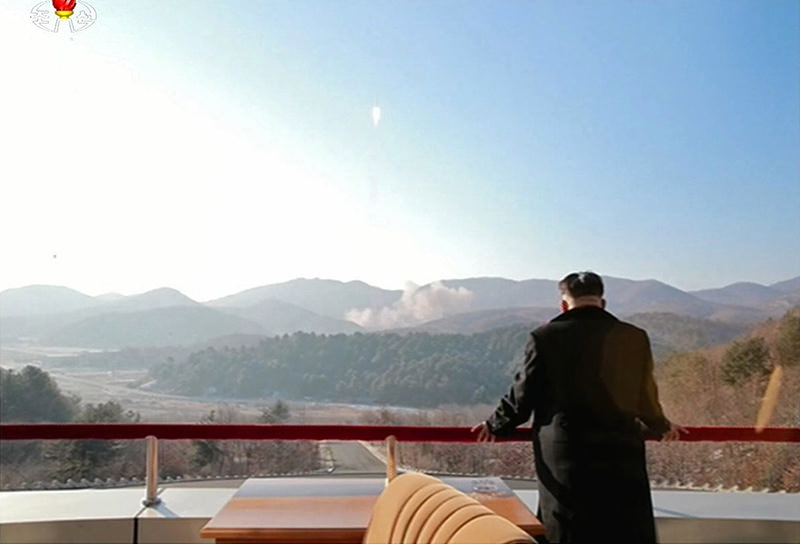 North Korean leader Kim Jong-Un (C) looking at the locket launch of earth observation satellite Kwangmyong 4. (AFP Photo)
by Anadolu Agency Feb 07, 2016 12:00 am
Turkey has condemned the launch of a long-range rocket by North Korea, calling it a violation of international obligations, the Foreign Ministry said Sunday in a statement.

"As with the fourth nuclear test by North Korea on 6th of January, this launch constitutes once again a total disregard to regional and international security and stability," the Turkish Foreign Ministry said.

The official statement carried by Pyongyang's state-run media was backed up by a South Korean military official, who was quoted by local news agency Yonhap as admitting that "it's presumed that the projectile has entered into orbit.

The ministry statement said Ankara was "deeply concerned by the possible negative implications of this irresponsible step taken by North Korea despite all international warnings".

"We urge North Korea to fully comply with its obligations under the relevant UN Security Council Resolutions without delay," the statement said.

The statement also said that Turkey attaches importance to the denuclearization of the Korean Peninsula and encourages the immediate resumption of the Six-Party Talks, held intermittently over the last decade by the U.S. Russia, China, Japan and the two Koreas.

The UN Security Council gathered Sunday in a closed-door meeting to discuss the issue at the request of South Korea, Japan and the U.S., strongly condemning the long-range rocket launch in a statement and vowing a new resolution for sanctions.

UN resolutions bar the North from ballistic missile technology, but the authoritarian state is yet to be punished for its nuclear test last month.

A statement from Seoul's presidential office condemned the rocket launch as "an extreme provocation".