Erdoğan: Time could come when Turkey opens its border to Europe for refugees 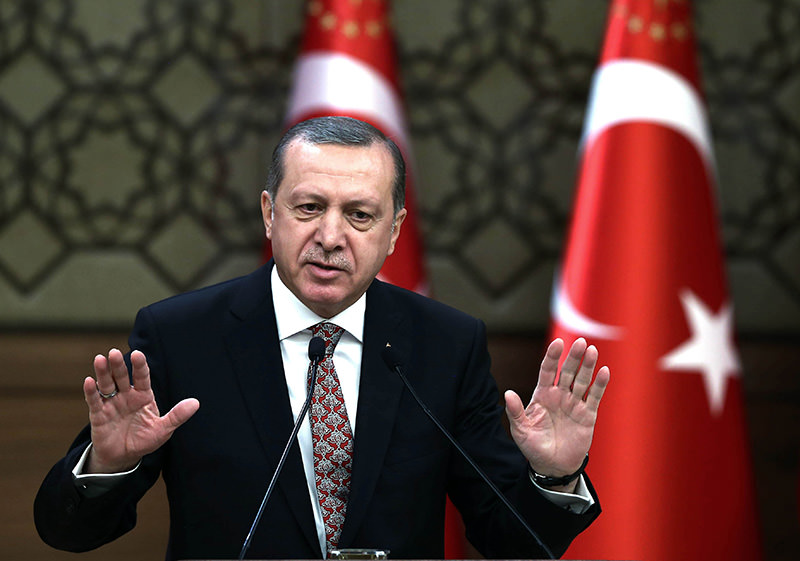 by Daily Sabah with Reuters Feb 11, 2016 12:00 am
President Recep Tayyip Erdoğan on Thursday said that Turkey will be patient up to a point over the crisis in Syria and could be forced to take action if necessary. Erdoğan said, he had previously told two top EU's officials, Jean-Claude Juncker and Donald Tusk, that the time could come when Turkey would open the gates for refugees to travel to Europe.

"In the past we have stopped people at the gates to Europe, in Edirne we stopped their buses. This can happen once or twice, and then we'll open the gates and wish them a safe journey, that's what I said," Erdoğan said during an address to the Young Businessmen Confederation of Turkey (TÜGİK) the capital Ankara.

Various news websites leaked earlier Erdoğan's minutes of meeting with Juncker and Tusk. The president said the leaked information were not "documents of shame."

"We did not just say these things there [during those meetings], we said this in every opportunity, there is no secret," Erdoğan said.

During Thursday's speech, the president has also slammed the United Nations for its double standards regarding the Syrian crisis and said that it was insincere of the UN to make a call to Turkey [on opening its borders] on refugees instead of taking action in Syria.

He harshly criticized the U.N. and others for urging Turkey to open its doors to Syrians waiting at the borders.

"It is hypocritical to remind Turkey of its international responsibilities," Erdoğan said, and noted that Turkey has done more than anybody else, which can be seen by the number of refugees accepted by each country.

Erdoğan urged the U.N. to make the same call to other member states, so that Turkey can send some of the refugees to those countries.

Russian war planes have been bombing around the Syrian city of Aleppo in support of a Syrian government offensive to recapture the city, sending tens of thousands of people fleeing to the Turkish border.

"There is a chance the new wave of refugees will reach 600,000 if air strikes continue," Erdoğan said.

Erdoğan said the Syrian crisis could not be resolved without safe zones, and said that ways of keeping Syrians in their country needed to be sought.

The president also noted that xenophobic and racist tendencies are becoming mainstream in Europe.