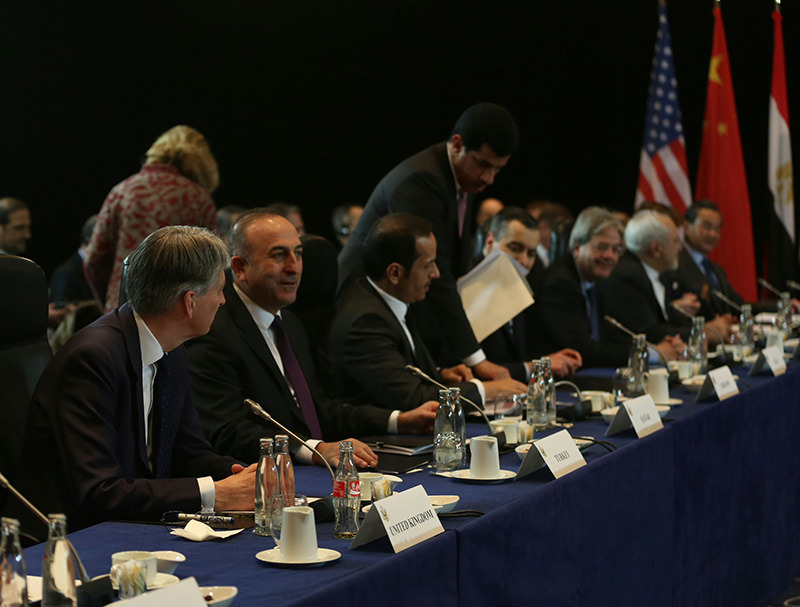 FM u00c7avuu015fou011flu [second from the left] in the Munich Security Conference (AA photo)
by Merve Aydoğan Feb 12, 2016 12:00 am
Speaking to the media on Friday at the 52nd Munich Security Conference, Foreign Minister Mevlüt Çavuşoğlu stressed the necessity of ending Russian airstrikes in Syria. Çavuşoğlu said: "The cease-fire reached by major powers will not hold and humanitarian access will not be effectively secured if Russia's airstrikes on opposition groups in Syria continue."

The Munich Security Conference was attended by a number of government officials from various countries such as Russia, Saudi Arabia and Iran. At the conference, U.S. Secretary of State John Kerry announced that the U.S. and Russia have agreed to implement a "cessation of hostilities" in Syria that should start in a week's time.Çavuşoğlu said that operations against terrorist organizations in Syria must continue and stressed that 88 percent of Russian strikes have been against opposition groups in Syria.

"If Russia continues its attacks in the region under the cover of fighting terror then a permanent cease-fire will not be established as the humanitarian aid will also not reach those in need," he added.

Regardingthe Geneva talks, Çavuşoğlu said the International Syria Support Group (ISSG) nine-hour meeting on Thursday primarily focused on relaunching the halted resolution talks. He said: "It is not possible for resolution talks to continue when airstrikes are ongoing. Another reason for the Feb. 3 talks were unable to continue was due to the obstacles to the distribution of humanitarian aid."

Turkish officials have always asserted that only a political solution will be a permanent resolution in Syria. In this regard, Çavuşoğlu told media members that airstrikes are expected to end within a week and that during that time resolution talks will be relaunched.

Explaining that the current conditions in the region are not suitable for the talks, Çavuşoğlu said two working groups in which Turkey will take part aim to establish the grounds for a resolution. One group will supervise efforts to ensure the humanitarian aid delivered to the country is being distributed effectively and the other will aim to establish and supervise the cease-fire in order to end the conflict.

Çavuşoğlu's remarks to the media were supplemented by statements he made on his personal Twitter account in which he said the statement released by the International Syria Support Group (ISSG) is "an important step on the way to finding a solution to the Syrian crisis."

"This statement underlined the issues impairing the Geneva process and presented an opportunity to unblock the stalemate before the political process. What is important now is embracing this opportunity, stopping the airstrikes, ceasing targeting civilians and providing humanitarian access," he said.

As part of the official meetings, Çavuşoğlu also met with his Qatari and Saudi counterparts in the framework of joint cooperation. Russian Foreign Minister Sergei Lavrov is also reportedly to meet the Saudi foreign minister on Friday, according to a source from the Russian delegation who spoke with Russian news agencies. In addition, U.S. Secretary of State Kerry on Thursday said that diplomats from the U.S., Russia and other powers also agreed to "accelerate and expand" the delivery of humanitarian aid immediately, bringing aid to besieged areas.
Last Update: Feb 13, 2016 12:03 am
RELATED TOPICS