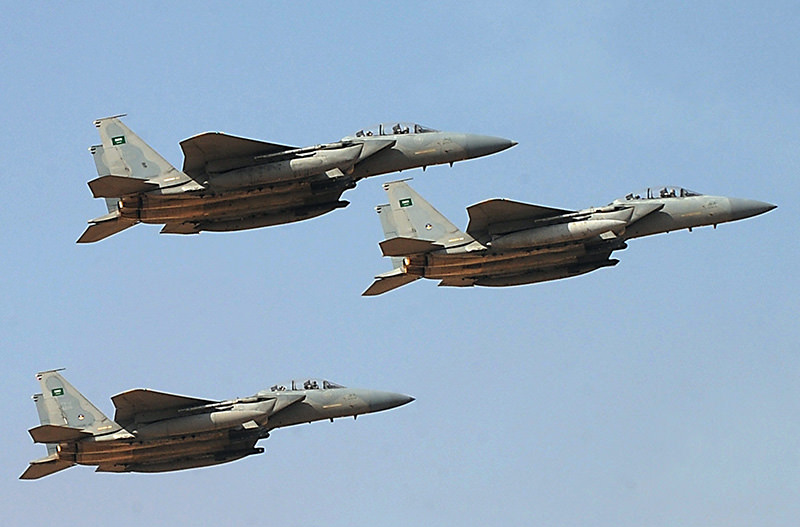 by Daily Sabah Feb 13, 2016 12:00 am
Foreign Minister Mevlüt Çavuşoğlu said on Saturday the fight against Daesh terrorist group must include ground operations, adding that Saudi Arabia will send fighter jets to Turkey's İncirlik Air Base as part of the US-led coalition forces' operations.

According to report on Turkish NTV broadcaster, answering reporters' questions on the plane on his way from Germany where he attended the Syria Support Group's ceasefire meeting, Çavuşoğlu said: "We, 65 countries, need to clear Daesh terror organization through air and ground operations, instead of hiding behind terror organizations [pointing out U.S.'s support to PYD]."

"If there is a strategy (against Daesh) then Turkey and Saudi Arabia may launch a ground operation," Çavuşoğlu was quoted as saying by Turkish dailies Yeni Şafak and Habertürk.

"Saudi Arabia is also sending planes to Turkey, to (the air base of) Incirlik. They (Saudi officials) came, did a reconnaissance of the base. At the moment it is not clear how many planes will come," foreign minister added.

Later on in the day, Turkish NTV broadcaster reported that around eight to ten Saudi jets would arrive at İncirlik airbase in the next couple of weeks, basing the information on unspecified military sources.

The broadcaster has also quoted FM Çavuşoğlu as saying that there has not been a decision or a strategy taken yet on any ground operations in Syria. The foreign minister reportedly said, "From the beginning, we have been telling the coalition [U.S.-led] that airstrikes will be not be enough to be successful in the fight against Daesh, and ground operations are needed."

"This is not a new idea, but there has not been a decision or a strategy taken on any ground operations," Çavuşoğlu said. The foreign minister reportedly made the comments in his hometown of Antalya, during his visit to the Association of Women and Democracy (KADEM).

İncirlik is a key joint U.S. air base used by the Turkish Air Force located outside the city of Adana, some 150 kilometers from the Syrian border.

Since November 2011, the U.S. air force has been flying unarmed drones from İncirlik Air Base. The U.S.-led coalition forces have also been conducting airstrikes from the air base against Daesh positions in Syria.

The counterparts talked about the latest developments in Syria as well as the decisions taken at the Syrian Support Group meeting.
Last Update: Feb 14, 2016 1:43 pm
RELATED TOPICS