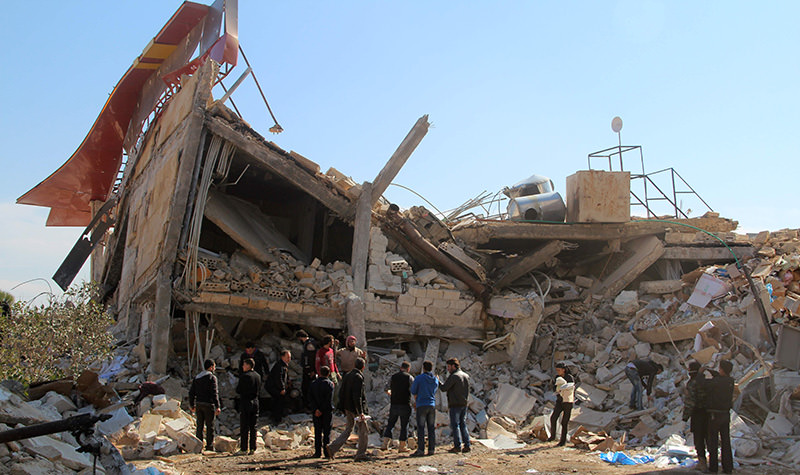 People gather around the rubble of a hospital supported by Doctors Without Borders (MSF) near Maaret al-Numan, in Syria's northern province of Idlib, on February 15, 2016, after the building was hit by suspected Russian air strikes. (AFP Photo)
by Daily Sabah with Agencies Feb 15, 2016 12:00 am
The foreign ministry on Monday said that Russia's airstrikes on hospitals and schools in Syria constitute war crimes and strongly condemned the attacks.

The statement released by the ministry said that over 30 innocent civilians, including women and children have been killed by the attacks, while over 100 people have been injured.

The ministry said that the attacks clearly constitute war crimes according to international law, and deepen the crisis in Syria, while urging Russia to immediately stop such attacks to prevent a greater catastrophe.

The United Nations and Washington also condemned air strikes on medical facilities and schools in Syria that the world body said killed almost 50 civilians, with the U.S. implicating Russia.

Such action "casts doubt on Russia's willingness and/or ability to help bring to a stop the continued brutality of the Assad regime against its own people", the State Department said.

Syria's Bashar Assad poured cold water on the plan for a ceasefire to begin later this week, saying it would be "difficult" to implement.

The MSF-supported hospital in Idlib is one of several health facilities Russia is accused of hitting since its aerial campaign began September 30.

More than 260,000 people have been killed since Syria's conflict began with anti-government protests in March 2011.