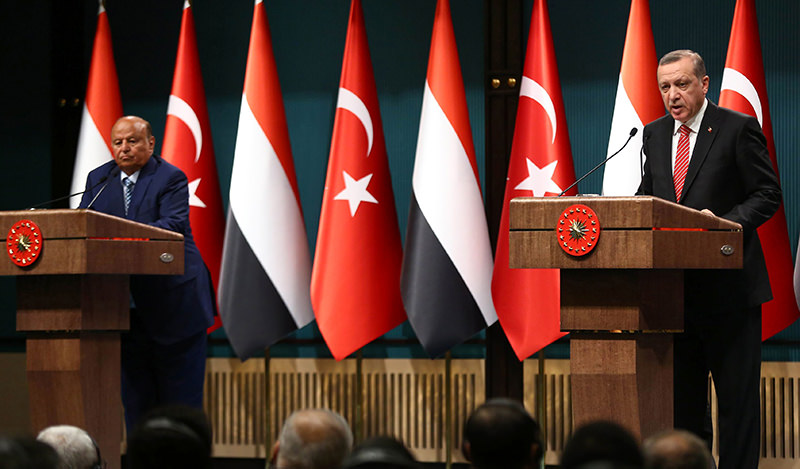 In a news conference with his Yemeni counterpart Mansour Hadi in Ankara, Erdoğan said those who recognized the PKK and Daesh as terrorist organizations should also list the PYD and its armed wing the YPG as terror groups as well.

"Both the PYD and the YPG are the organizations of the Assad regime," he said and added that the West should "understand that there is no difference between the PYD, PKK, Daesh or DHKP-C."

The PYD and YPG are affiliated with the PKK, which has been fighting a terrorist insurgency against Turkey since 1984 and is recognized as a terror organization by both the EU and U.S. The DHKP-C is a far-left terror group outlawed by Turkey and the West.

Erdoğan said Turkey was cooperating with the U.S.-led coalition against terrorist groups in Syria and Iraq.

"However, some coalition forces announced Turkey's shelling of PYD targets in northern Syria in retaliation as 'Turkey struck Kurdish people in Syria'," he said. "I call on those [people] to behave honestly."

The Turkish military has been shelling PYD positions in northern Syria for four consecutive days in response to artillery fire from PYD forces based around Azaz in northern Aleppo province. The town is 6 kilometers (4 miles) from the Turkish border.

The U.S. has urged Turkey to halt cross-border artillery fire and called on the PYD not to take advantage of a widespread Syrian government offensive in the country's northwest to seize new territory.

Russia is accused of supporting YPG, which is trying to take control of the Azaz region in Syria near the Turkish border.

At least 250,000 people have been killed since the Syria conflict began in 2011, according to U.N. figures, with 7.6 million internally displaced and more than 4 million having fled to nearby countries.

Turkey, already home to more than 2.6 million Syrian refugees, has long pushed for the creation of a safe zone in northern Syria to protect displaced civilians without bringing them over the border into Turkey.
Last Update: Feb 16, 2016 11:03 pm
RELATED TOPICS