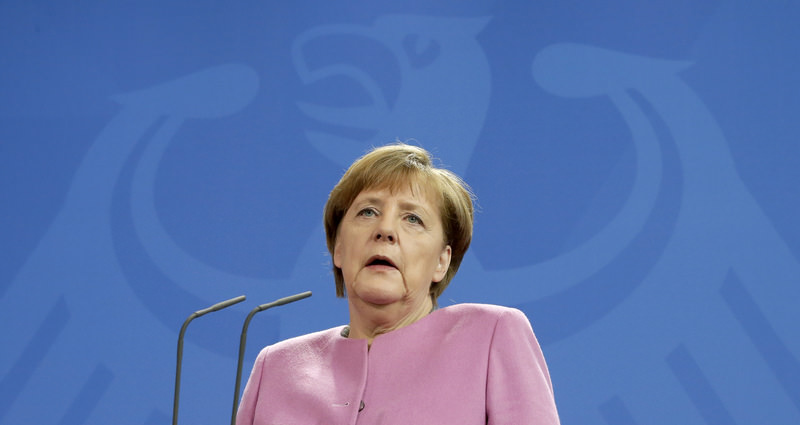 by Anadolu Agency
Feb 16, 2016 12:00 am
German Chancellor Angela Merkel pledged on Tuesday to promote the EU's agreement with Turkey to stem the flow of refugees into Europe.

In a news conference following her meeting with Israeli Prime Minister Benjamin Netanyahu in Berlin, Merkel criticized a proposal to close the EU's internal borders to stop refugees travelling through the Balkans.

She said such a move would threaten the Schengen border-free zone that allows for the free movement of people and goods within Europe.

Instead, the chancellor wants Turkey would seal its borders and then fly refugees - mostly Syrians fleeing their country's five-year civil war - to Europe for settlement under a quota system.

EU leaders are due to meet in Brussels later this week for talks on the refugee crisis that saw more than 1.1 million enter the EU last year, mostly via Turkey and EU member Greece. More than 78,000 have crossed from Turkey to Greece so far this year, according to the International Organization for Migration.

"I'll put all my strength on Thursday and Friday into ensuring that the European-Turkish approach turns out to be the way that's worth going," she said.

Merkel told reporters the EU would become a "laughing stock" if member state leaders attempted to agree new quotas, having so far failed to resettle the 160,000 refugees agreed under last year's quota deal.

Turkey and Germany have requested help in stemming flow of refugees and combating people smugglers. Last week, NATO sent a naval force to the Aegean to assist the Turkish and Greek coast guards.

Meanwhile, Netanyahu stressed his country's need for U.S. military and financial assistance to ensure its security.

"Terrorists are threatening our domestic security right at our borders," he said. "Therefore, if it is a matter of ensuring Israel's security, then the U.S. is its traditional supporter."

The premier added that the lifting of sanctions against Iran posed a danger for Israel as it would increase Tehran's finances and allow the "entry of high-tech weaponry systems".
Last Update: Feb 16, 2016 10:40 pm