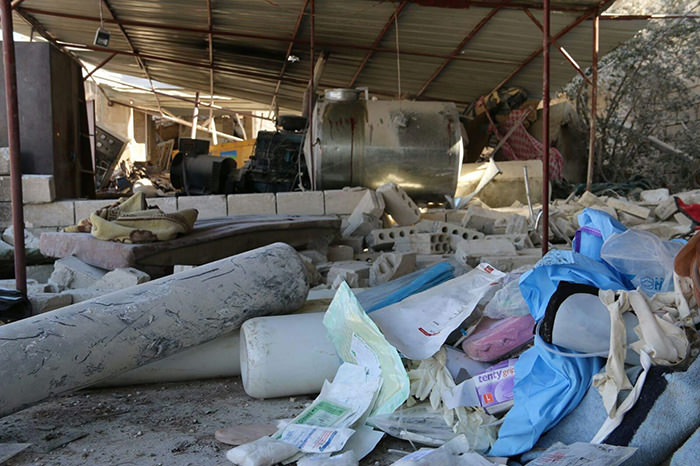 |EPA Photo
by Compiled from Wire Services Feb 16, 2016 12:00 am
The United Nations and the European Union condemned on Monday Russian airstrikes on medical facilities and schools in Syria that the world body said killed almost 50 civilians, with the U.S. implicating Russia.

The United Nations in Geneva has condemned deadly air strikes on Monday on hospitals and schools in northern Syria. U.N. human rights spokesman Rupert Colville told a news conference on Tuesday that "if there was deliberate, intentional targeting of those facilities, it could amount to a war crime."

"Clearly Syrian and Russian planes are very active in this area; they should know who is responsible, that is all l can say at this moment," Colville said in a press conference on Tuesday.

The scale of attacks on schools and hospitals in Syria suggest that it is a deliberate "war tactic," Colville added. U.N. Secretary General Ban Ki-moon has condemned recent missile strikes in northern Syria. Five medical units and two schools were hit in Monday's strikes, which the U.N. says claimed around 50 civilian lives and injured dozens of people, including children.

Colville described the number of killed and injured as "ridiculous and shocking and absolutely inexcusable."

News of the strikes comes amid U.N. efforts to facilitate a cease-fire in the war-torn country. U.N. envoy Staffan de Mistura met Syrian regime's Foreign Minister Walid al-Moualem on Monday to discuss a cessation of hostilities, humanitarian access to all besieged areas and a resumption of peace talks, U.N. spokesman Ahmad Fawzi said.

De Mistura was scheduled to meet Moualem in Damascus again later on Tuesday, Fawzi said, adding that he had no further information on whether de Mistura will meet Syrian opposition groups.

Turkey's ambassador to the United Nations has told the U.N. Security Council that Russian aerial attacks on Syrian civilians must stop.

Halit Çevik's remarks came Monday at a Security Council meeting on the role of the U.N. charter for the maintenance of peace, in which representatives from more than 70 nations took turns delivering speeches.

Çevik said the U.N. itself had recorded that hospitals and schools in northern Syria had been hit by Russian fire, as Moscow props up the regime of Bashar al-Assad.

He told delegates there should be an "immediate end to all attacks against civilians, including indiscriminate aerial bombardments".

The MSF-supported hospital in Idlib is one of several health facilities Russia is accused of hitting since its aerial campaign began September 30.