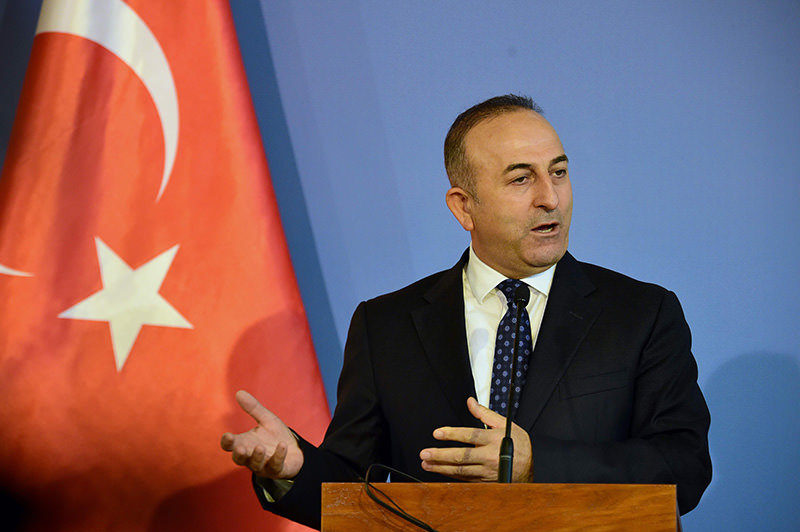 | AFP Photo
by Daily Sabah with Agencies Feb 16, 2016 12:00 am
Foreign Minister Mevlüt Çavuşoğlu said on Tuesday that It would be unrealistic for Turkey, Saudi Arabia and Qatar to conduct ground operations in Syria alone.

Turkey, Saudi Arabia and some European allies want a ground operation in Syria but there is no consensus in the coalition and a strategy for such an incursion has not been seriously debated, the foreign minister told Reuters.

"Some countries like us, Saudi Arabia and some other Western European countries have said that a ground operation is necessary ... But to expect this only from Saudi Arabia, Turkey and Qatar is neither right nor realistic," Çavuşoğlu said in an interview in Ankara.

"If such an operation is to take place, it has to be carried out jointly, like the (coalition) air strikes," he said.

"The coalition has not given this ground operation issue serious debate. There were opponents, and there were those who weren't going to take part but expressed a desire for Turkey or another country doing it," he said.

Çavuşoğlu said Turkey had repeatedly made the case for a more comprehensive strategy in Syria beyond air strikes but it had not been discussed seriously by the U.S.-led coalition.

"Of course, there would be air strikes but a cleansing on the ground is also needed. I stated in every meeting ... that Daesh could not be destroyed or stopped by air strikes," he said,

"The coalition has not given this ground operation issue serious debate. There were opponents, and there were those who weren't going to take part but expressed a desire for Turkey or another country doing it."

Çavuşoğlu said Turkey supported the resumption of negotiations for a political solution in Syria but that they would go nowhere if Syrian government forces did not first halt their bombardments.

U.N.-backed peace talks, which were suspended earlier this month, are scheduled to resume in Geneva on Feb. 25.

"One needs to be realistic. While bombs are falling from the sky and people are being massacred under the pressure of the regime or are being starved, the talks cannot be very fruitful," Çavuşoğlu said.

He also said Ankara and Washington needed to work harder to overcome differences over the role of the Syrian Kurdish YPG militia. Turkey sees the group as hostile insurgents backed by the Syrian government and Moscow and has shelled YPG positions over the past four days.

Washington sees the PYD, the YPG's political wing, as a partner on the ground in the fight against Daesh in Syria.

"We may be thinking differently but both sides need to put in more effort to iron out these differences," Çavuşoğlu said. "Our American friends have openly told us that they understand our sensitivities."

On Monday, Qatar became the latest Gulf state to signal its willingness to intervene in Syria with ground troops.

Last week, Saudi Arabia and the United Arab Emirates announced their readiness to send troops to Syria under the umbrella of the U.S.-led anti-Daesh coalition.

Saudi Arabia had already said this month it was ready to join any ground operation against Daesh.