Russia uses expired bombs in Syria to prevent damage in its own country, PM says 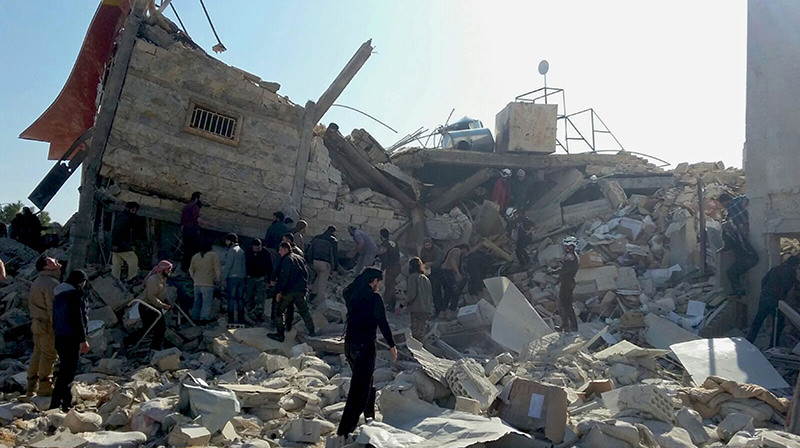 A handout image dated 15 February 2016, provided by the Mu00e9decins Sans Frontiu00e8res (MSF) or Doctors Without Bordersorganization, showing destruction and rubble at an MSF-supported hospital in Idlib province in northern Syria (EPA Photo)
by Daily Sabah with Agencies Feb 17, 2016 12:00 am
Prime Minister Ahmet Davutoğlu on Monday accused Russia of indiscriminately using expired bombs to finish their stocks while carrying out attacks in northern Syria, to prevent environmental damage in their own country if they were to destroy them in Russia.

Speaking at his party's parliamentary group meeting, Davutoğlu said that Russia randomly attacks throughout northern Syria, without making a distinction between civilians and military targets.

"Russian warplanes do not use smart bombs and they are shelling all their bomb stocks without thinking or estimating where they hit since they are trying to use up their expired bomb stock in their inventories," he said.

Davutoğlu noted that Russia is thus attempting to prevent the environmental damage that could be caused if they destroyed the expired stocks in their own country, calling it a vile and inhumane plan.

He added that Russian jets conducted 200 such sorties over the little town of Azaz on Monday alone.

He harshly criticized Russia for its actions in Syria, saying the latest developments have come to a point that now threaten Turkey's national security.