No doubt Ankara attack was carried out by YPG, Erdoğan says 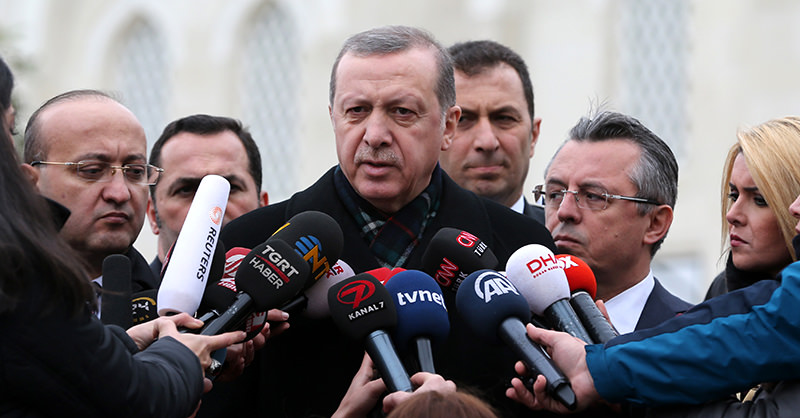 Pesident Erdoğan reiterated on Friday that the perpetrator of the terrorist attack on military buses was the PKK’s Syrian offshoot the YPG/PYD and added that he would speak with U.S. President Obama regarding the matter

Recep Tayyip Erdoğan reiterated Friday that the perpetrator of the terrorist attack on military buses in Ankara, which killed 28 people, was the PKK terrorist organization's Syrian affiliate's Democratic Union Party's (PYD) armed People's Protection Units (YPG) and added that he would share his thoughts about the matter with U.S. President Barack Obama during a phone conversation late on Friday.

Addressing reporters, Erdoğan said that authorities do not have the "slightest doubt" that the group carried out the attack and three of the 17 suspects who were detained in simultaneous operations played active parts in the attack. "The suicide attacker is a YPG member, we have absolutely no doubts about that," Erdoğan asserted. He said that Turkey has provided all evidence needed to prove who was responsible for the terrorist attack and criticized the countries that refuse to recognize the PYD and its YPG militia as terrorist organizations, even though most countries, including the U.S. and EU, recognize the PKK as a terrorist organization.

Erdoğan also said: "We are saddened by the West's reluctance to understand. ... What else do you want from us? We have given you all the documents and information," he added. Erdoğan also said that he would discuss all of these issues with Obama over the phone.

Foreign Minister Mevlüt Çavuşoğlu also criticized the United States for making conflicting statements regarding the PYD and YPG and urged the U.S. to cut its ties with the terrorist group.
Çavuşoğlu's comments came during an official visit to the Georgian capital of Tbilisi where he slammed the U.S. for cooperating with the YPG and PYD. He said Turkey is "pleased" that U.S. Secretary of State John Kerry has described the Syrian-Kurdish YPG as untrustworthy. "Although conflicting statements are coming from the U.S., it is a significant development that they have started to understand this issue," Çavuşoğlu said.

Turkey was shaken by a deadly car bombing that rocked Ankara on Wednesday, killing 28 people and injuring 81. The attack was carried out by a Syrian national named Saleh Nejar, 24, who was born in Syria's Hasakah province. Turkish authorities have detained 17 suspects in operations carried out across the country. The PYD and its YPG are largely accepted as the Syrian affiliate of the PKK, which is recognized as a terror organization by the U.S., EU and NATO. On Thursday, Kerry called his Turkish counterpart to express condolences on the deaths of military personnel and civilians in Wednesday's terrorist attack in Ankara that killed at least 28 people wounded dozens more.

"Obviously, they're part of the same organization, but not these ones who are taking territory in and around Aleppo ... the groups that we've been supporting through airstrikes, through various means, have actually continued to effectively fight ISIL [DAESH] on the ground in northern Syria," he said.

He also said that the U.S. is aware that the YPG, the PKK's Syrian affiliate Democratic Union Party (PYD) militia – is currently taking additional territory outside Afrin, including areas close to Azaz and the Mannagh Air Base in northern Syria near the Turkish border. Toner said the U.S. was very clear in its message to the YPG that taking additional land around Afrin and Azaz was "heightening tensions with Turkey."

Toner refused Turkish claims that U.S. weapons were given to the PKK and added that "equipment and various weaponry, while given to good guys, somehow sometimes ends up in the hands of the bad guys," while declining to comment on remarks by Syria's U.N. envoy who said Syrian Kurdish groups supported by the U.S. are also supported by the regime.
Last Update: Feb 19, 2016 9:44 pm
RELATED TOPICS