Syria ground operation by Turkey and Saudi not on agenda, FM Çavuşoğlu says 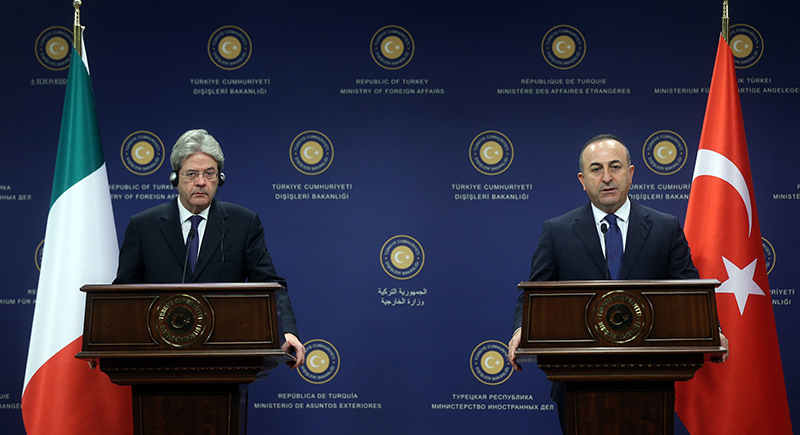 | AA Photo
by Daily Sabah with Agencies Feb 22, 2016 12:00 am
Turkey's Foreign Minister Mevlüt Çavuşoğlu held a joint press conference in Ankara on Monday with Italian Foreign Minister Paolo Gentiloni. Çavuşoğlu discussed the disagreement between Turkey and the U.S. regarding the Democratic Union Party's (PYD) armed wing People's Protection Units (YPG), and said that U.S. Secretary of State John Kerry told Çavuşoğlu that, "the YPG is not trustworthy, thus there must be more action against DAESH."

Çavuşoğlu reiterated that the PYD is a PKK affiliate, adding that all documents and evidence regarding PKK terrorists holding positions in the PYD have been provided to U.S. authorities. Çavuşoğlu said, "Following the recent bombing in Ankara, Prime Minister Ahmet Davutoğlu directly shared information showing that the attack was carried out by the PYD. We have solid evidence that the PYD/YPG is a terrorist organization. Relying on a terrorist organization to combat DAESH shows incompetence, desperation." Underlining that Turkey will continue to speak with evidence, Çavuşoğlu said such matters cannot be discussed based merely on assumptions.

Asked whether Turkey and Saudi Arabia are jointly planning on ground operations in Syria, Çavuşoğlu said that there has been disinformation. Recalling that 65 countries established a coalition against DAESH in Iraq and Syria, he added that from the first meeting it was known that airstrikes would not be sufficient to halt DAESH activities throughout the region. Minister Çavuşoğlu added that such an operation will not be carried out, neither by Turkey on its own nor with another country, and dismissed rumors of Turkey and Saudi Arabia preparing for a ground operation in Syria. "Rather than leaning on another terrorist organization on the ground in the combat against DAESH, we 65 coalition countries can very well combat these organizations. Thus, Turkey and Saudi Arabia conducting an operation in Syria has never come up in our agenda, and is not on our agenda," Çavuşoğlu added.

Çavuşoğlu indicated that issues related to Syria, Iraq and Libya were evaluated during his meeting with Italian Foreign Minister Gentiloni. Both Çavuşoğlu and his counterpart emphasized the outstanding bilateral relations, and said that there will be more official visits between the two countries this year. Çavuşoğlu said that Turkey and Italy's position on the region are realistic, as there is no hidden agenda for either country, which allows developments in the region to be assessed more realistically. Commenting on Turkey's EU accession process, the Italian foreign minister praised the Turkish government for its determination and expressed full support for Turkey at all times.

Çavuşoğlu criticized the international anti-DAESH coalition's reliance on the PYD to provide ground forces against DAESH in Syria. Çavuşoğlu said it showed "weakness and desperation to count on another terror group in the fight against DAESH."

The PYD and its armed wing the YPG are seen as terrorist organizations by Turkey, which has accused the group of siding with the regime of Syria's Bashar Assad, as well as being behind last week's car bomb attack in Ankara that killed 28 people. While Turkey has shelled PYD positions, the U.S.-led alliance has supported the group in Syria, with the U.S. describing the PYD as a "reliable partner" in the fight against DAESH.

"It is indeed a huge mistake. A drowning man should not clutch at a straw because that straw would only drown him. If all these countries are depending on another terrorist group to fight a terrorist organization, this is just an indicator of the situation in Syria. We must promptly put an end to this mistake," Çavuşoğlu added.

Last week, Çavuşoğlu indicated the U.S. position on the PYD was shifting. He said U.S. Secretary of State John Kerry had referred to the group as "untrustworthy" in a recent telephone call. Speaking on Monday, he expressed the hope that all sections of the U.S. government would "see the truth" about the PYD.