Turkey welcomes Syria plan but not optimistic on peace talks 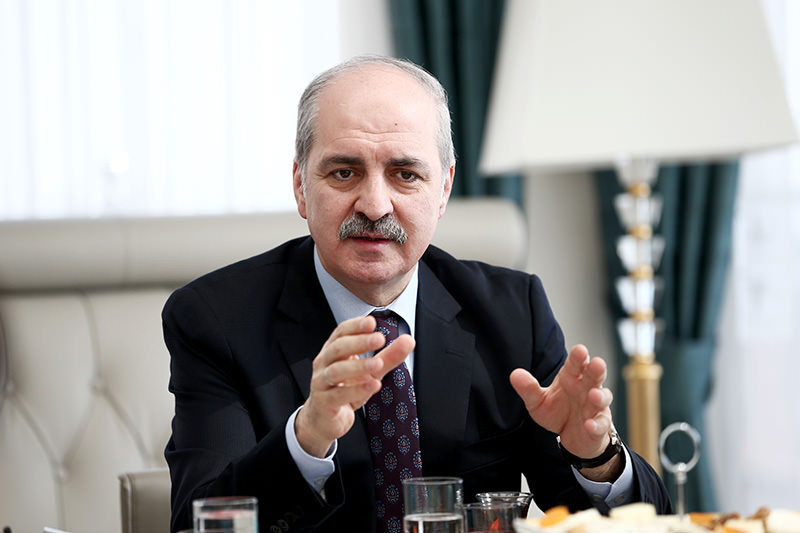 | AA photo
by Daily Sabah with Wires Feb 23, 2016 12:00 am
Turkey welcomes plans for a halt to fighting in Syria but is not optimistic about a positive outcome to talks on a political transition, Deputy Prime Minister Numan Kurtulmuş said on Tuesday.

Addressing a gathering of foreign journalists in the Turkish capital Ankara, Kurtulmuş said Ankara had reservations concerning actions which Russian forces could take against Syria's moderate opposition and civilians.

"I welcome this truce but I am not very optimistic that it will be respected by all the parties," he said.

The deputy prime minister expressed Turkey's hope that all countries come to a common understanding for a political transition in Syria without Assad in six months and a government in which all groups are represented is established within 18 months.

In response to a question asking if Turkey will continue to bomb PYD/YPG targets in Syria following the ceasefire, Kurtulmuş said Turkey did not use artillery fire without any attack being directed at the country.

"If you fire at us [Turkey], then we fire back. In even the latest cross-border operations against the PKK, Turkey has never done anything out of the blue unless the PKK have attacked," Kurtulmuş said.

The United States and Russia announced plans on Monday for a cessation of hostilities in Syria, excluding Daesh and Nusra Front militants, that would take effect starting on Saturday.

The formal announcement came after Barack Obama and Vladimir Putin spoke on the matter by telephone.

The Syrian regime on Tuesday accepted the terms of the ceasefire deal, according to a foreign ministry statement seen by AFP.

The statement said the regime would stop armed operations but would "continue counter-terrorism efforts" against the Daesh group, Al-Qaeda and affiliated groups.