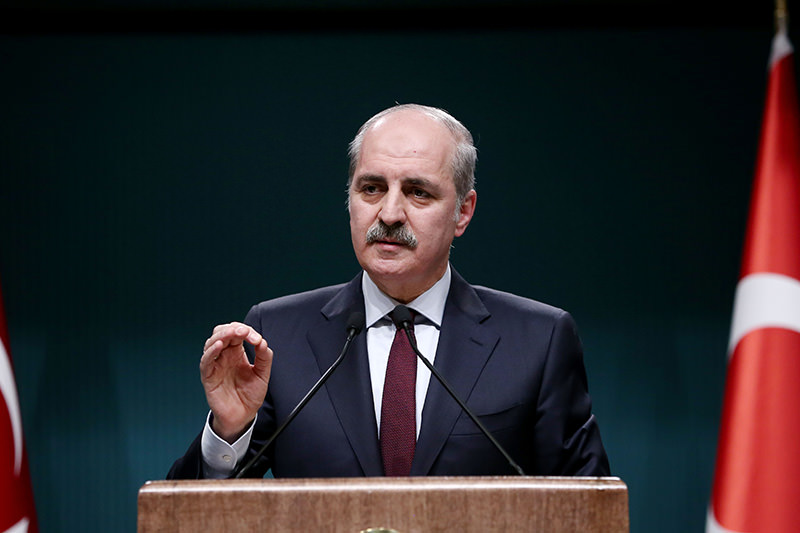 by Daily Sabah with AA Feb 24, 2016 12:00 am
Deputy Prime Minister Numan Kurtulmuş on Wednesday welcomed the deal to temporarily halt fighting but added the process "contains a danger" in that Russia and the Syrian government have said they would continue to attack "terrorists".

In televised remarks, Kurtulmuş said that Turkey is generally in favour of the ceasefire deal, but worries about potential Russian airstrikes.

The deputy PM added Turkey would continue to respond to cross-border threats but would not initiate any military action. Turkish units have recently bombarded Syrian terror group PYD/YPG, which is affiliated with PKK terrorist organization, positions in northern Syria.

According to Turkey and other members of the anti-Daesh coalition, both Moscow and Damascus have been attacking moderate opposition under the guise of fighting terrorists such as Daesh and the al-Qaeda-linked Nusra Front terrorists.

The agreement announced by the U.S. and Russia earlier in the week is for a cessation of hostilities to begin on midnight Friday local time. It is hoped it will allow for further aid to be delivered to desperate Syrians.

Daesh and the Nusra Front are excluded from the cessation of hostilities.

Meanwhile, Syria's moderate opposition said on Wednesday that they will respect the recently reached ceasefire 'for two weeks' in a statement released.

"The High Negotiations Committee believes a provisional truce for two weeks would provide a chance to determine the commitment of the other side" to the ceasefire, the group said in a statement.

According to the UN figures released several months ago, more than 250,000 have been killed since the Syrian war began in 2011. This week, Turkish President Recep Tayyip Erdoğan said that around 400,000 people had died and 12 million people been displaced since the war started.
Last Update: Feb 24, 2016 11:50 pm
RELATED TOPICS