Turkey will continue to support Somalis to live in peace, Erdoğan says 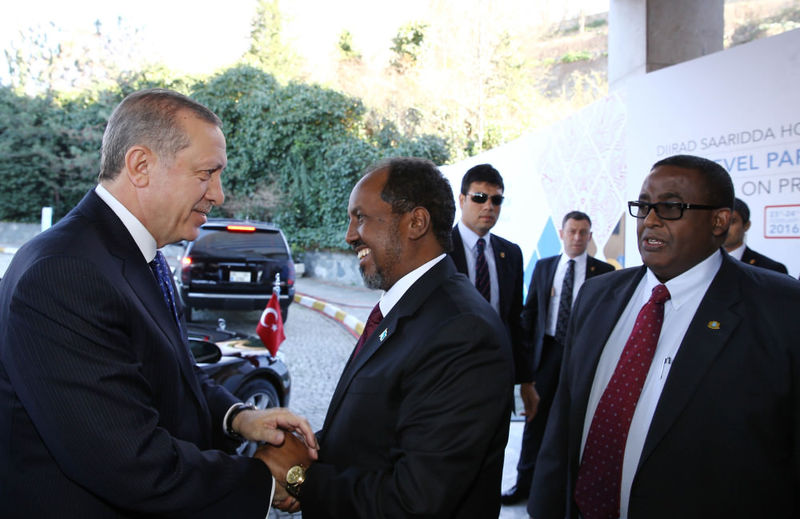 by Daily Sabah Feb 24, 2016 12:00 am
Turkey will maintain its support for Somalis to live in peace and safety, President Recep Tayyip Erdoğan said on Tuesday in Istanbul during an opening speech at the sixth Somali Compact High-Level Partnership Forum (HLPF), which he is co-chairing along with Somali President Hassan Sheikh Mahmoud and U.N.'s Deputy Secretary-General Jan Eliassoin. Somali and foreign delegates from 51 countries have converged in Istanbul for a two-day forum to discuss Somalia's reconstruction process. "As you all know, Somalia is going through a critical period. … On this rocky road, we need to support Somalia and never leave [Somalis] in the lurch," Erdoğan said in his speech, referring to the country's political, security and development agenda, focusing on terrorism.

Somalia's security needs are being addressed in efforts to seek tangible solutions to fight al-Shabaab terrorist activities in the country. Al-Shabaab is an al-Qaeda-linked militant group and was among the topics covered throughout the forum.

"I believe that the improvements that we will make for easing our Somalian brothers' daily lives and increasing their welfare will also contribute to the country disposing of its terror problem. Essentially, the thing that lies under the success of the Turkish model in Somalia, which you all watch with interest, is our acting with this mentality. We also expect international cooperatives to support Somalia with the same attitude," Erdoğan said.

Explaining that Turkey shouldered the country's reconstruction process through universities, orphanages, roads, hospitals and even street lamps that are put into service through humanitarian institutions, Erdoğan said: "We will continue our work until Somalia finds tranquility and becomes a peaceful, stable country with the cooperation of the international community and regional countries, hopefully."

He also said that Somalia has become the symbol of Turkey's perspective on Africa and the relations that it wants to have with Africans.

Turkey's role in Somalia has gained significance since Erdoğan's visit in 2011 as prime minister, the first head of the Turkish government to visit Somalia.

Turkey's engagement in Somalia has made visible changes to the country in many areas from health to infrastructure. Bilateral agreements have also been signed, including treaties to train the Somali national army, and Turkish Airlines has started flights to the capital of Mogadishu. Turkey's efforts have paid off, and the increasing relationship between the two states has brought attention to the region and many have started to question Turkey's involvement in Somalia.

Turkey also provided Somalia with over $400 million in the biggest aid campaign to the country in its struggle to fight starvation. Turkey is set to open its first military base in Africa at which Turkish military officers will train Somali soldiers and troops from other African countries to fight al-Shabaab, military sources said in January.

"All countries should adopt a common stance against terrorism and countries that support terrorism. Saying 'but' in this matter, making a differentiation between good terrorist and bad terrorist, and overlooking the link [between terror organizations] seen before, is supporting terrorism," he said.

"Everyone needs to understand that with such a stance, there can be no struggle against terrorism," he further added.

Erdoğan was referring to the U.S.'s stance defining the PKK and PYD as two separate, unlinked organizations; whereas, a 2014-dated document from the U.S. National Counterterrorism Center (NCTC), a U.S. government organization, describes the PYD as the Syrian affiliate of the Kongra-Gel (KGK), under which the PKK is also listed. The U.S. does not consider the PYD and its armed YPG wing to be terrorist organizations, despite Ankara's warnings.

The Turkish affiliate PKK and Syrian, Iraqi and Iranian affiliates are all united under the Kurdish Communities' Union (KCK) umbrella organization, which the U.S., EU and Turkey recognize as a terrorist group.
RELATED TOPICS