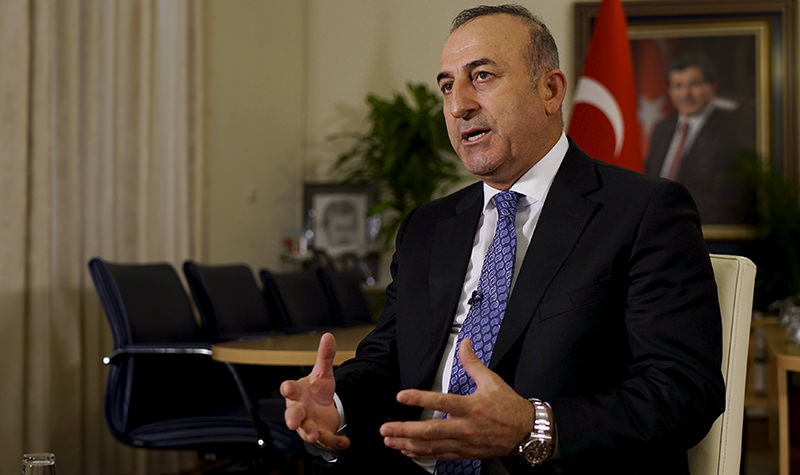 | Reuters Photo
by Daily Sabah with AA Feb 25, 2016 12:00 am
Foreign Minister Mevlüt Çavuşoğlu said on Thursday that YPG terrorists would like to divide Syria just like Daesh.

Speaking at Anadolu Agency's Editor's Desk, Çavuşoğlu said that the main goal in Syria should be to ensure the country's territorial integrity rather than giving it to a single entity.

"The PYD and YPG's aims are obvious. They want to split Syria, to establish administrations for them each and they do not hide their goals."

Çavuşoğlu also said that the U.S. was being betrayed by the PYD.

Referring to the group's recently opened bureau in Moscow he said, "The PYD has started to sell out the U.S. and has opened an office in Moscow."

Çavuşoğlu also said the actual implementation of a cessation of hostilities in Syria is more important than its announcement.

He said that Turkey had supported a political solution in Syria from the beginning but warned that previous deals had broken down.

"The regime and Russia did not respect the decisions taken before," Çavuşoglu said.

"The U.S. is approaching with caution, based on its experiences. The U.S. accepts that Russia did not respect previous agreements and maintained their attacks and had a negative role in the process ..."

The Turkish minister suggested the U.S. had acted in "good faith" with Russia but had been too trusting at times.

An agreement announced by the U.S. and Russia earlier in the week is for a cessation of hostilities to begin on midnight Friday local time. It is hoped it will allow for further aid to be delivered to desperate Syrians.