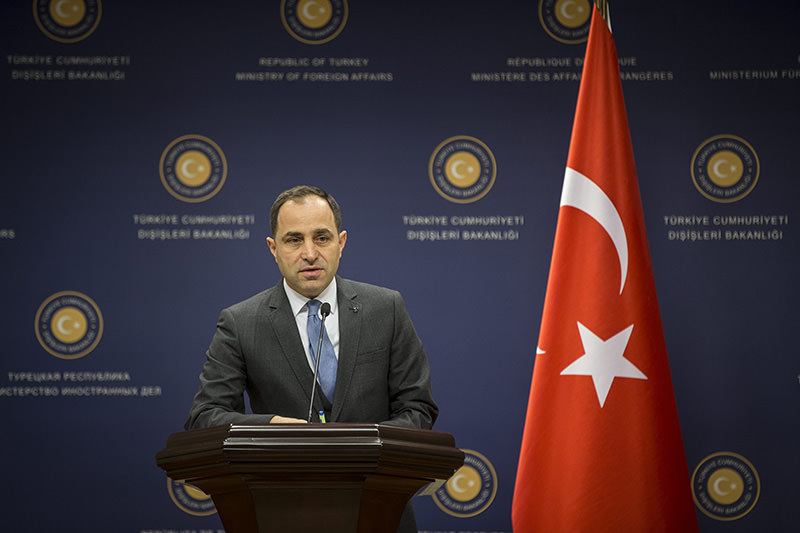 Foreign Ministry spokesman Tanju Bilgiç drew attention to the government's efforts to overcoming the migrant crisis during a press briefing on Wednesday where he said that Turkey does not have a "magic wand" to immediately end illegal migration. Bilgiç said that Ankara has offered to sign a readmission agreement with 14 countries that would realize the return of illegal migrants to their country of origin or transit.

Commenting on recent reporting from Agence France-Presse (AFP) regarding Ankara's refusal to allow vessels to enter Turkish waters for NATO operations, Bilgiç said that the reporting was "absurd" and that Ankara is "the mastermind" behind the launching of a NATO mission to crack down on criminal networks smuggling refugees into Europe over the Aegean Sea.

Bilgiç also responded to Russian allegations of weapons being sent to Syria hidden in aid convoys from Turkey, and said the claims are not to be taken seriously as they aim to cover up Russia's war crimes in Syria.

With the civil war in Syria continuing and the success of the recently announced cease-fire debatable, the Foreign Ministry said that the results of the upcoming Geneva talks depend on the success of the cease-fire. Bilgiç said that Ankara is doing everything possible while taking all the necessary measures to stop illegal migration. "Putting an end to illegal migration immediately is of course not a matter of discussion. We do not have a magic wand to realize this right away as it needs time and determined combat. We have taken significant steps to halt illegal migration, which includes Turkey recently announcing a regulation allowing Syrians to work as of Jan. 15," he added.

Bilgiç further said that there were modifications made to visa regimes for third-party countries and that there has been measures taken regarding e-visas as well. He said that Ankara has offered to sign a refugee readmission agreement with 14 countries and that there has been a significant drop in refugees traveling to the Greek islands since October 2015. According to the ministry's recent data, 24,120 illegal migrants were stopped in Turkey during the months of January and February and 93 human smugglers were arrested. Bilgiç announced that on Feb. 15 alone 985 illegal migrants were prevented from crossing.

Responding to claims from AFP that NATO vessels deployed in the Aegean Sea to help stop the flow of migrants to Europe have not yet started operating in Turkish waters due to Ankara refusing them permission, Bilgiç said that the report is "absurd and fabricated." "It is obvious that such reporting is baseless if you consider Turkey's initiatives taken for NATO's involvement on the Aegean Sea," Bilgiç added that Turkey and Germany agreed on a 10-point joint action plan on Feb. 8 to overcome illegal migration. He further said that Turkey is the "mastermind" behind the NATO involvement on the Aegean and that Turkey aims for NATO to carry out its involvement without interrupting the problems between Greece and Turkey.

Bilgiç said Russian claims of weapons being sent to Syria hidden in aid convoys from Turkey should not to be taken seriously as they are intentionally made to cover up war crimes. Bilgiç also said Turkey has only hit DAESH targets in Syria since the start of the cease-fire this weekend, adding that Bashar Assad's regime and Russia have been carrying out airstrikes since the truce began. Bilgiç strongly denied claims of Turkey shelling an area in which journalists are located and said that Turkey has never hit the area.