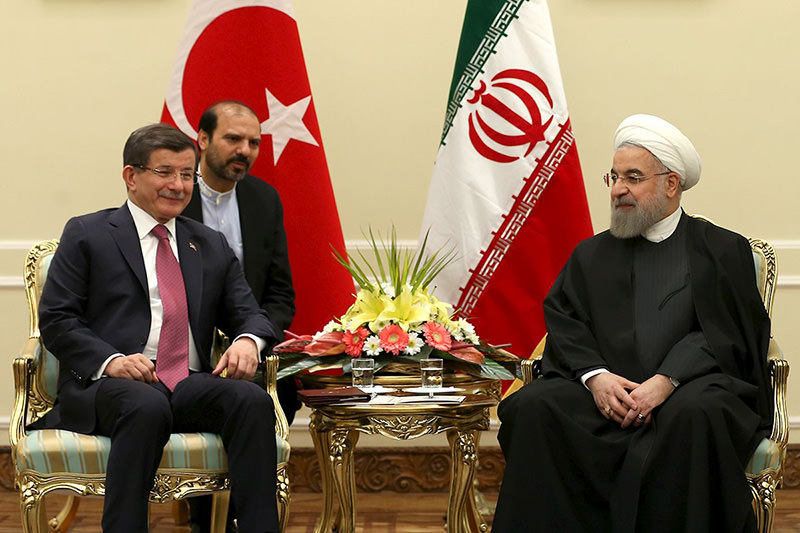 He said that the two countries have agreed to support the cessation of hostilities in Syria during the negotiation process. "[Turkey and Iran] believe that stopping the bloodshed will provide an important basis for political negotiations," Davutoğlu said.

Davutoğlu went on to say that he believes that Turkey and Iran are in agreement regarding the need to protect Syria's territorial integrity, support the cessation of hostilities for the negotiation process, represent all of Syria's various elements in the government, fight terrorism and avoid dependency on foreign actors to solve the region's problems.

Even though Ankara and Tehran's opinions on Syria have differed in the past, Davutoğlu asked Iran not to let foreign actors decide the final outcome. "We should not let the fate of the region be in the hands of foreign actors," he said.

Recalling the times when Turkey stood by Iran amid sanctions imposed by the West, Davutoğlu said: "I'm saying once more: We stood by Iran during its toughest times. Our cooperation in the future will benefit not only the two countries, but also the entire region."

He said that Turkish-Iranian relations are rooted in Turkish history and that important steps have been taken between Turkey and Iran that will shape the future of relations between the countries.

A cessation of hostilities agreement went into effect in Syria on Feb. 27, paving the way for the resumption of talks.

Since the truce went into effect, the regime of Bashar Assad, which is backed by Lebanon's Hezbollah group along with Russia, has continued to carrying out attacks both from the air and on the ground.

The U.S., EU, Turkey and Gulf Arab states, for their part, say that only when Russia halts airstrikes in Syria in areas inhabited by civilians or held by opposition groups can a genuine cease-fire be achieved.