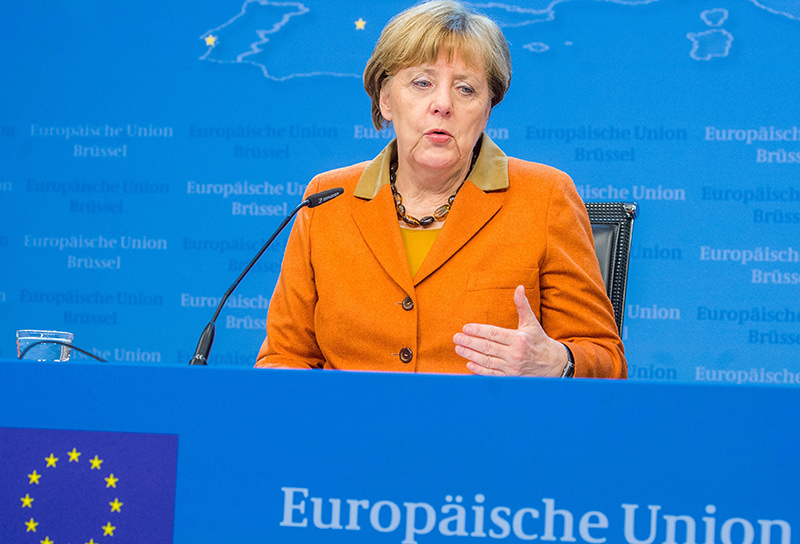 German Chancellor Angela Merkel gestures as she speaks during a press conference at the end of an extraordinary summit of European Union leaders with Turkey in Brussels, Belgium, 08 March 2016 (EPA Photo)
by Daily Sabah with Agencies Mar 08, 2016 12:00 am
German Chancellor Angela Merkel said on Tuesday things were moving in the right direction after the EU agreed a draft deal with Turkey to stem the flow of refugees to Europe, a touchstone issue for voters in state elections on Sunday.

The deal is a crucial sign of progress for Merkel, battling domestic resistance to get a European plan to tackle a crisis that brought over 1 million refugees to Germany last year.

"Overall, things are going in the right direction," Merkel told SWR radio, also trying to assuage worries that Turkey is blackmailing Europe, "No. We are seeking a balance of interests," she said.

EU leaders welcomed an offer by Ankara to take back refugees crossing into Europe and agreed in principle to its other demands but delayed a deal until March 17-18.

The CDU and the SPD have lost support before Sunday's votes in Baden-Wuerttemberg, Rhineland-Palatinate and Saxony-Anhalt, but Merkel's own rating bounced back last week after hitting a 4-1/2 year low in February.

Forsa pollster Manfred Guellner said the draft deal would help shore up her support among Germans, although it would widen the divide between the CDU and SPD with the anti-immigration AfD party and Bavaria's conservative Christian Social Union (CSU).

"The majority will say 'That is Merkel. She is toiling away again, she is engaged, she is trying to convince others, and she is on the right path'," Guellner said.

During 12 hours of negotiations, Turkey insisted that any agreement would require Europe to advance Turkey's accession to the bloc. Turkey also said it expects EU nations to ease its visa restrictions on Turkish citizens within months.

The EU has so far pledged a funding of 3 billion euros ($3.3 billion) to Turkey that is home to 2.75 million refugees chiefly from neighboring Syria. "Turkey is ready to work with the EU, and Turkey is ready to be a member of the EU as well," Turkish Prime Minister Ahmet Davutoğlu told reporters in Brussels.