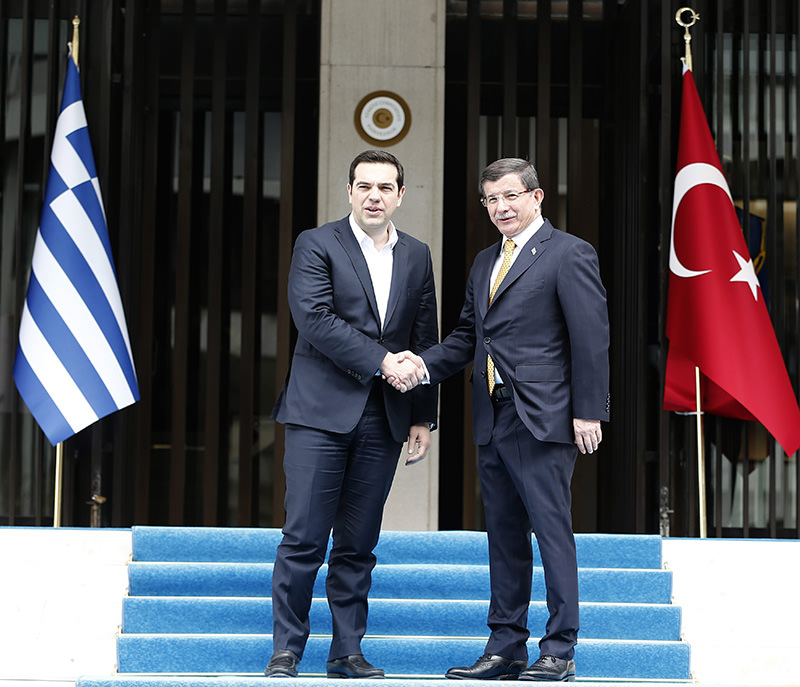 by Daily Sabah with Agencies Mar 08, 2016 12:00 am
Turkey shares a common perspective with Greece on the need to share the burden of the refugee crisis and the two countries have agreed a legal framework for combatting illegal migration, Turkish Prime Minister Ahmet Davutoğlu said on Tuesday.


"Turkey and Greece are giving a common answer to those in Europe who have the attitude that Greece and Turkey should deal with the crisis on their own," Davutoğlu told a joint news conference with his Greek counterpart in Turkey's Aegean coastal city of Izmir.

Greece's Tsipras said the two countries would step up efforts to tackle traffickers in the Aegean Sea and would not implement "some plan imposed on us by some of our partners. We're here to solve a problem that concerns us, our values, our civilization," he said.

"We have decided to intensify our cooperation and to re-affirm the bilateral agreement. That is very important," he added.

The agreement to take back migrants attempting to reach the European Union was a key condition set by EU leaders in Brussels on Monday for a landmark deal with Turkey to tackle the refugee crisis.

Davutoğlu said that despite differences in opinion between Greece and Turkey, improved cooperation could "reduce the dramatic scenes seen in the Aegean Sea to a minimum."

He said the plan would turn the Aegean from a "sea of despair in which people lose their lives" into a "sea of happiness and joy, as Tsipras called the situation in the Aegean Sea, where hundreds of refugees have drowned already this year making the perilous crossing in rickety boats, a "shame and disgrace to our culture".

More than 130,000 migrants and refugees have traveled to the Greek islands from the Turkish coast so far this year.

Turkey is the main launching point for migrants making the dangerous crossing over the Aegean Sea to the Greek islands.


Turkey already hosts 2.7 million refugees from the five-year civil war in neighboring Syria, more than any other country.

Within the bilateral talks on Tuesday both countries also agreed to a series of cooperation agreements to further integrate highway, rail and maritime transport networks. Davutoğlu gave the news as he announced that direct flights between Ankara and Athens would begin.

Davutoğlu reiterated that the visa requirement for Turkish citizens to travel to EU countries will be lifted by the end of June.

In the press conference, Davutoğlu also touched upon the rocket attack earlier in the day that killed two people in the border town of Kilis.

The attack, which saw rockets fired into Kilis from Syria and hit a building, showed how "fragile" the Syrian ceasefire is, he said, adding that Daesh militants were behind the attack.