Italy, France back up Turkey-EU plan for refugees 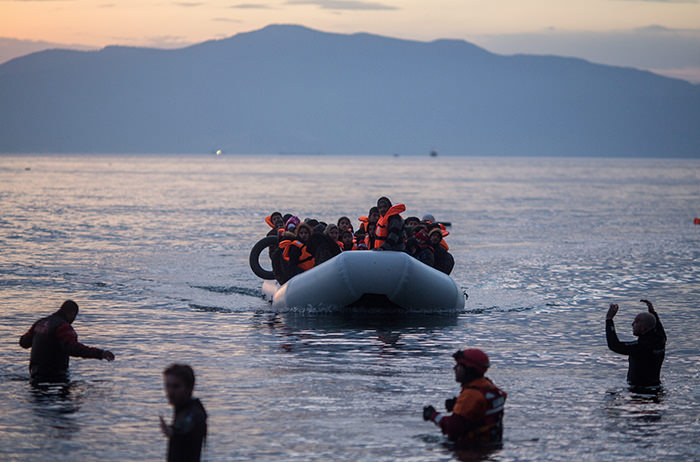 efugees arrive on a rubber boat from Turkey on the Greek island of Lesbos, near the port city of Mytilene, Greece, 09 March 2016 (EPA Photo)
by Daily Sabah with AA Mar 09, 2016 12:00 am
Italy and France have been added to nations backing up the tentative agreement on Monday between Turkey and the European Union regarding the refugees crossing into the European borders from Turkey.

"We are very pleased to have exerted all our efforts to open new pages in Turkey and EU relations," Italian Prime Minister Matteo Renzi said in a joint press conference with French President Francois Hollande after the 33rd Italy-France intergovernmental summit held late Tuesday in the Italian canal city of Venice.

Turkey and the EU discussed various proposals Monday such as the acceleration of the visa liberalization process for Turkish citizens.

The Italian premier said that it was a long EU-Turkey summit where leaders discussed how Europe needed to concretely respond to the refugee flows in the future, especially from Libya and Syria.

"There is still a lot to work on and discuss, but finally Europe has come to realize how serious this issue is," he said, adding that Italy had been "experiencing these things for years".

Of the more than 1.1 million refugees who arrived in the EU last year, more than 850,000 arrived by sea to Greece from Turkey, according to the International Organization for Migration (IOM). Over the course of the year, 805 people died in the Aegean.

Nearly 135,000 migrants or refugees have crossed into Greece and Italy since the beginning of 2016, according to the IOM.

"We must use the fragile cease-fire in Syria, since there is a negotiation process that has been conducted, as enough as possible. This negotiation could end up in a political transition," added Hollande.

According to Turkey's proposal to the EU, seen by Anadolu Agency, the country wants the 28-nation bloc to "share the burden'' based on a formula of "for every Syrian readmitted by Turkey from the Greek islands, another Syrian will be resettled from Turkey to the EU member states".

Meanwhile, the British Prime Minister David Cameron on Tuesday also voiced his support for the progress in talks between Turkey and EU leaders on a plan to resolve the refugee crisis.

"That would, if implemented, break the business model of the people smugglers and end the link between getting in a boat and getting settlement in Europe," Cameron said in Brussels.

Ankara also requested visa-free travel for its citizens by the end of June and an additional 3 billion euros ($3.3 billion) to meet the needs of Syrian refugees in Turkey.

In exchange, the EU expected Turkey to crack down on human smugglers and stem the flow of refugees coming into Europe via its neighbor Greece.