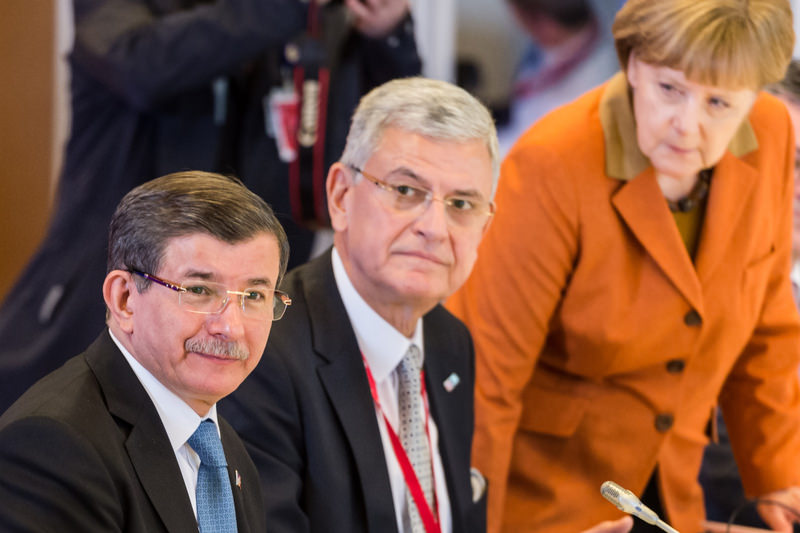 PM Davutou011flu (L) with German Chancellor Merkel (R) during a special Turkish-EU summit in Brussels on Monday.
by Yunus Paksoy Mar 10, 2016 12:00 am

German Chancellor Merkel is expected to spend the next 10 days trying to bring several opposing member states on board with the draft action plan with Turkey as Ankara will wait and see since it has nothing to lose on the issue, columnists say

Having presented a new and unexpected proposal to cope with the refugee crisis that surprised European Union leaders at Monday's summit in Brussels, Turkey now eyes the next summit on March 18, as German Chancellor Angela Merkel will exert efforts to convince some member states unsatisfied with the new draft action plan. Prime Minister Ahmet Davutoğlu along with EU Minister and Chief Negotiator Volkan Bozkır and other delegates on Monday met with EU leaders in Brussels at a special Turkey-EU summit to address the migrant and refugee crisis that has overwhelmed the 28-nation bloc. Davutoğlu put forward a new plan that was discussed for almost the entire day.

The plan pledges that Turkey will take back from Greece all refugees who make the dangerous journey across the Aegean. It, however, asked for double the financial aid for refugees in its refugee camps and faster visa liberalization for Turkish citizens as well as opening more chapters than previously announced in its EU accession process. Davutoğlu's plan also demands that the EU take in the same number of refugees from Turkey directly that Turkey takes back from Greece. According to the plan, Turkey would receive an additional 3 billion euros by the end of 2018 on top of the already agreed to 3 billion euros of financial aid to Ankara. Visa-free travel for Turkish citizens would also go into effect by the end of June 2016 at the latest.

Davutoğlu's plan, which was considered a possible game changer at the summit, was hailed quickly by most EU member states and European Council President Donald Tusk. "The days of irregular migration to Europe are over," Tusk said in reference to Turkey's pledge to take back all refugees.

Despite hours of long debates over how the summit statement should be written, EU leaders agreed to take some time and assess the details of the draft plan until March 18.

The EU is troubled by some member states' insistence on not taking in any refugees. Prime Minister Viktor Orban of Hungary, for example, strongly opposes a plan to resettle refugees from Turkey in member states. "They would hang me from the nearest light pole here in Budapest if I agreed to something like that," he said a couple weeks ago in reference to accepting refugees to Hungary.

Hungarian government spokesman Zoltan Kovacs said on the day of the summit that Orban vetoed the Turkish-EU resettlement plan.

Hungary is not alone in its resistance to a resettlement plan. Slovakia is also vocal in not accepting refugees. Slovakian Prime Minister Robert Fico, who has 10 days to form a government after Sunday's elections, has repeatedly said he is inclined to protect his country and not accept Muslims into it.

While some member states block a deal with Turkey and create tensions in the 28-nation bloc against any resettlement plan, Merkel said Tuesday things were moving in the right direction after the EU partially agreed to Davutoğlu's draft deal to stem the flow of refugees and migrants.

The chancellor is expected to try and convince opposing member states until the coming summit on March 18. It remains unknown whether she will be willing to give some concessions to countries that oppose the plan such as not resettling any refugees in them.

Ankara has already asserted that it will perform its "humanitarian" duty and help refugees. "We have done whatever is necessary, are still doing it and will continue to do so," Davutoğlu said before departing to Brussels on Sunday, adding: "Even though it is not fair and appropriate, Turkey can handle it alone."

President Recep Tayyip Erdoğan also voiced his frustration with the delayed financial aid that the EU had pledged to provide Ankara. "It's been four months. They are yet to deliver," Erdoğan said in a speech in Ankara, adding that he hoped Davutoğlu would return with the money.

Erdoğan has taken an unwavering stance toward the EU and its commitments. "When the EU cannot deliver its promises, Turkey could send refugees on buses and planes," Erdoğan warned. "Patience, patience, patience and then we will do whatever is necessary. Buses and planes are not there for nothing," he said.

Kemal Öztürk, a columnist for the Yeni Şafak daily, told Daily Sabah that the EU cannot solve the crisis without Turkey and it is the EU that is in deep trouble. Asserting that the EU has a leadership problem, Öztürk said: "Turkey's diplomacy and policy has proven to be creative and productive. Turkey's intention to resolving the crisis is successful diplomacy. My only worry is about the EU even though Turkey stands firm with its strong will and policies for a solution."

Hinting at the possibility of other countries apart from Hungary and Slovakia that may block the deal, Öztürk said Turkey does not necessarily need the deal, as it has been sheltering nearly 3 million refugees, declaring: "The EU still talks about the effect. This crisis cannot be solved without ending the crisis in Syria. The EU cannot produce policies."

The EU needs a deal more than Turkey, Hilal Kaplan, a columnist for the Sabah and Daily Sabah dailies told Daily Sabah. Commenting on Monday's summit, Kaplan said the EU is divided, which is a sign of its inability. "The EU has been warning and bashing Turkey with progress reports and calling it Islamist. It now abstains from even taking in 5,000 or 10,000 refugees while Turkey has more than 2.5 million of them. I am proud as a Turkish citizen because of this," she said.

She said that Turkey should not step down from its demands and asserted that Ankara's demands are not exaggerated. "We will see the EU's strength and solidarity. It used to look down on Turkey, but now it is the one that asks for help. The period ahead of us will show us the EU's future," she contended.

Enes Bayraklı, a foreign affairs specialist at the Political, Economic and Social Research Foundation (SETA), also spoke to Daily Sabah and said it now comes down to talks among EU member states to determine the fate of the deal. "The draft plan shows how strong Turkey's hand is. What Turkey has done so far strengthens its hand and has led to an unprecedented improvement in the relations," he said.

Asserting that Merkel will now use other instruments to convince some member states, Bayraklı said the EU is going through a test. He also contended that the plan will favor and benefit Turkey should the EU find common ground.
RELATED TOPICS